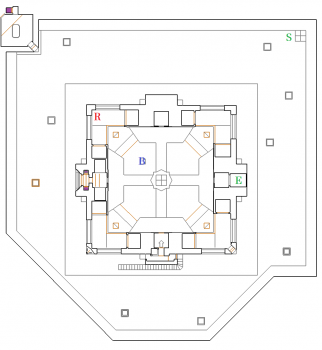 Mephisto’s Mausoleum is one crazy level and probably one of the hardest levels in the Master Levels expansion. You begin outside the Mausoleum and immediately 6 or 7 Revenants will be alerted to your presence.

Quickly pick up the Shotgun and Backpack and run around to find the Chaingun with boxes of ammo. Use the pillars and corners of the building for cover and take down the Revenants one by one.

The darker colored pillar to the west can be lowered down. Inside is another Revenant and also a teleporter that will take you to the center of the large building. Once you’re inside quickly grab one of the weapons on the platform and drop down into one of the corner pits. From here you can carefully take out the Revenants on the walkways above.

Once you’ve dealt with the Revenant on the walkways teleport up and take out the Mancubus inside the Icons of Sin. There’s one inside each upper cage. Don’t use too many rockets because you’ll need them for later.

After you’ve taken out the Mancubus there’s still no rest. Walls in the corners will open up releasing Hell Knights. They’ll teleport up to the walkways so be careful. 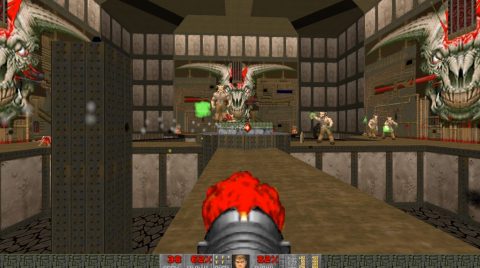 After the Hell Knights you’ll still need to deal with the Arachnotron’s in the upper cages. Use the Chaingun from the center to snipe them off. When you’re finally done with all the enemies find the Red Key in one of the corner pits and then head out the door in the opposite corner.

When you’re outside yet more Revenants will teleport out to get you so chase them down like you did the first set.

Head to the structure in the corner and use the Red Key to get inside. When you get close to the tomb a Revenant will rise up. Press the Button to remove the bars in the south-west corner of the mausoleum. Head down there and grab the Blue Armor. When you grab it stairs will lift up on the southern side of the building. 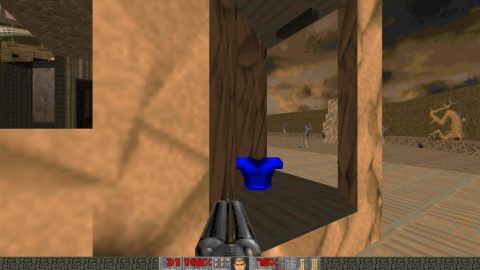 Climb up the steps, take out the Hell Knight and Revenant in the room above and grab the SoulSphere. Drop down into the central room and kill the four Baron’s of Hell and a Revenant or two. When you drop down from the room above the pillar with the Blue Key will lower. Drop into the pit and grab it.

Head back out the Red Door and open the Blue Door on the western side of the building. Take out the two Barons of Hell, grab the MegaSphere and open the walls to the north and south for Secret 1 and 2 and Secret 3 and 4. Each of these small rooms actually counts for two secrets.

Don’t go up the lift just yet. Instead go back to the small corner structure and ride the small wall around the tomb up. You can also dash across from the entrance but it’s easier just to ride the small ledge up.

Run across to the small hole in the north wall and open the wall to the right for Secret 5 with Invulnerability. SAVE your game before you grab it.

Quickly grab the Invulnerability and dash over to the Blue Door. Ride the lift up and take out the two Barons of Hell as quickly as possible. Aim for the Icon of Sin on the other side of the room and start shooting. You need to kill all the Specters in front of Romero’s Head before it will take damage.

If monsters spawn to your left or right quickly take them out and continue firing at the Icon. It may take 15 to 20 rockets to shoot past the Specters and kill the Icon. 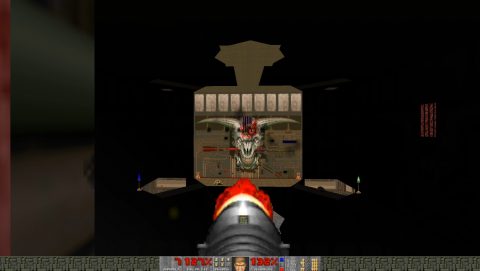 The level will end a few seconds after you’ve struck the killing blow in the Icon of Sin.