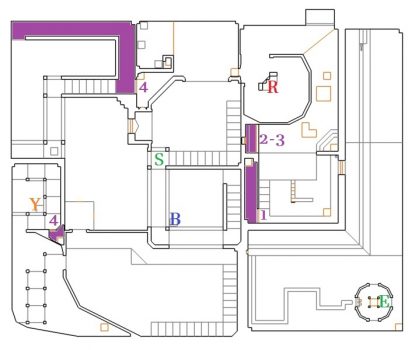 The start of this level is fairly difficult. Begin by taking out the Shotgun Guy in front of you on the steps and pick up his Shotgun. Run down the stairs and take out the Chaingunner before dealing with the rest of the enemies. Hide behind the stone wall if you need to get out of sight while you take them out.

The Skull Button opens a panel that leads to a teleporter. If you step on the stone in front of it you’ll be taken down to the basement area. Watch out for the three Imps that rise up out of the ground in front of the teleporter.

Go through the teleporter which takes you back to the Start location. Watch out for the Pain Elemental floating around here. Take it out when you have the ammo and a safe location to shoot it from. Head along the walkway to the right and down the other set of stairs. 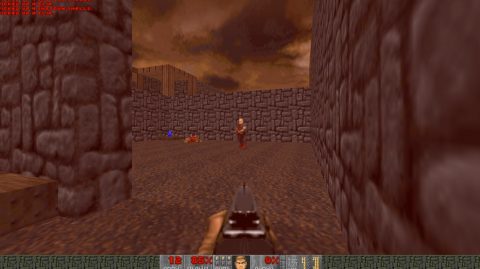 Grab the Blue Key in the corner after taking out the enemies and head back up the stairs. Head down the other set of stairs and go through the door with the blue lamps next to it. 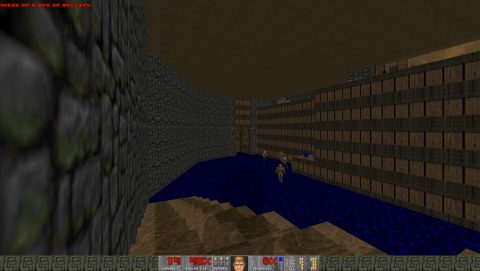 Take notice where the Blue Armor is located. You can get to it by dropping down from the ledge above.

Go through the opening to the next area and make your way around to the right. Clear out the enemies and then from halfway up the stairs run to the edge of the stairs and drop over the edge to the Yellow Key. 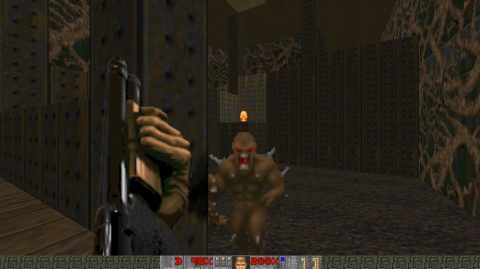 Find the corner of the stairs where the wall is at an angle. Open the wall just next to it for Secret 4. Drop down for a BFG and MegaSphere.

Quickly run forwards, pick up the Super Shotgun and take out the enemies. There’s a Chaingunner behind the wall ahead and a Cacodemon and Pain Elemental floating somewhere to the left.

As you make your way down the corridor an alcove will open with 3 Specters. Continue forwards but watch out for the crushers in the roof. They’ll be activated if you walk under them. 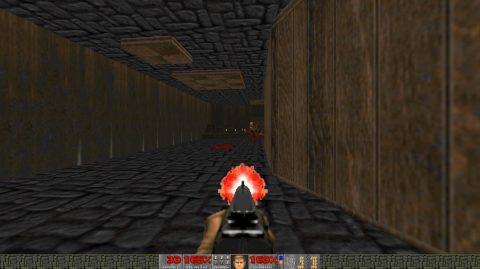 Watch out for the 3 Imps in the cage to the right. That’s a secret that you’ll get to in a minute.

First clear out the Imps in the slime and then walk across the walkway to the face Button. This lowers a number of teleporters including the one in front of you to the left.

Go through the teleporter and it will take you to a teleporter that has also been lowered in the corner of the hallway with the crushers. Step off it and go through it again. This time you’ll be on the ledge with the Red Key. Grab it and then head back to the slime room.

Open the wall on the western side at the landing of the stairs. See map for Secret 1. Go inside for some goodies and then go through the teleporter. You’ll be taken to the cage where you killed the Imps. This is Secret 2 and Secret 3. Grab the Backpack before opening the wall in the middle and using the teleporter.

That’s it for the basement for now so head back and take the lift back up to the starting area. Press the Skull Button and go through the teleporter.

Open the wall between the Button and the teleporter for Secret 4. Watch out for the Baron of Hell wandering around these hallways. Head up the stairs and follow the walkway around to a MegaSphere and bunch of BFGs. 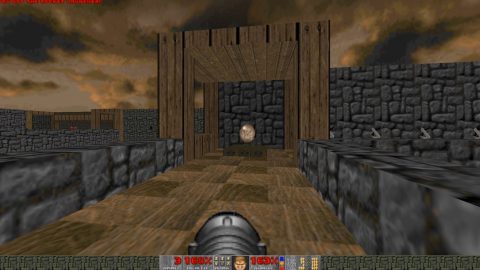 The pedestal with the MegaSphere lowers when you lower the teleporters in the basement.

Make your way back to the slime room in the basement and go through the Blue Door. Follow the walkway around to the right for a Radiation Suit and then all the way to the left.

Carefully walk out onto the thin ledge and follow it all the way around. Press the Button at the end and it will lift up a walkway. Drop onto it and follow it around to the pillar with red and yellow bars. Open them and go through to the Exit.