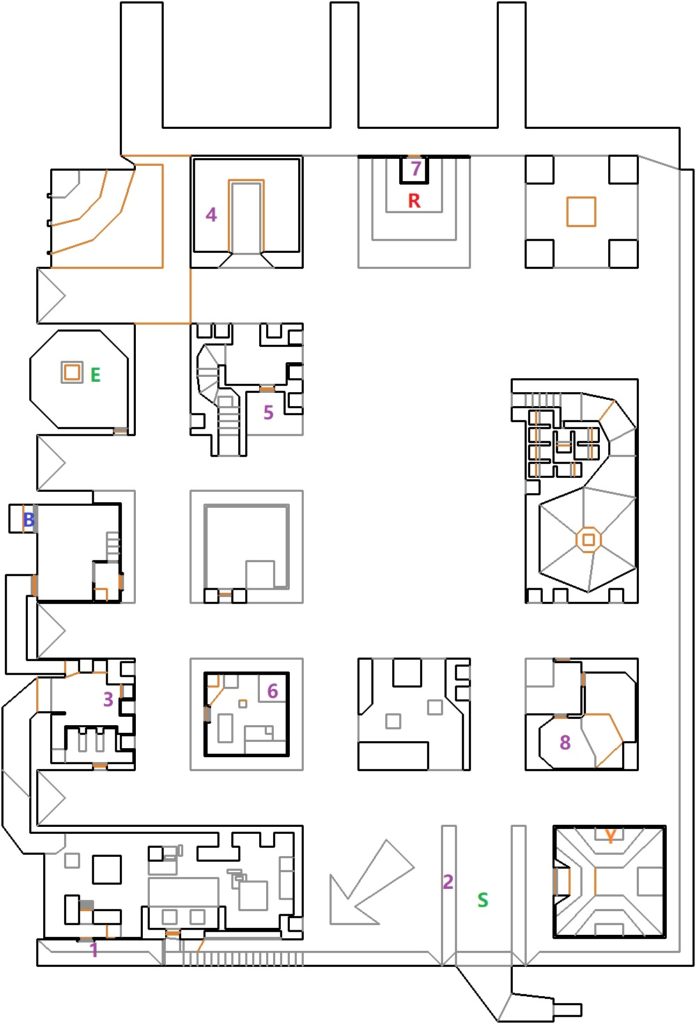 Downtown is a fairly large map with lots of small buildings to explore. You’ll want to begin by clearing out most of the wandering monsters so you can be free to explore. Use Rockets, Plasma or the BFG to kill the Arachnotrons on the platform just ahead. Run all the way forwards to the other end of the map and pick up the Invincibility Sphere. Run back to the open courtyard and take out the 4 Revenants on the ledge.

Try to take out as many of the other enemies as you can while you’re still invincible. There’s another 2 Arachnotrons as well as a few Cacodemons. You’ll also find Imps hidding on the side of many of the buildings. When you’re done take a breather and run around to collect any of the items you want that are littered about the place.

If you’re going for 100% kills enter the south side of the building near to Secret 3 and take out the Imps. Next head to the southernmost building and grab the Beserker pack. A dozen Lost Souls will be released. Take them out and then head up the steps to the first building.

Clear out the room of Imps and Demons and then press on the Switch on the south-western wall of the room. This opens up Secret 1 with some ammo and a Health Pack. Press on the box just next to the Switch to lower it down revealing another Switch. Hit this Switch and steps will appear at the front of this section of boxes. Walk up the stairs to a teleporter which takes you to Secret 2, the wall next to the Starting area. 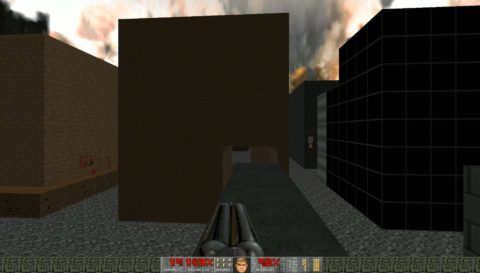 Run forwards and dash into the building ahead where you killed the Arachnotrons. Inside you’ll find a Soul Sphere and ammo.

Drop down and head back into the first building. Drop down into the walkway in the north-west corner, take out the Cacodemon and take the lift to the next building.

Kill the Imps and then press on the face Button on the wall for Secret 3 and Shotgun Shells. Drop down the hole to the left of the entrance. Enter the next building and take out the Mancubus. Pick up the Blue Key but don’t go through the teleporter. Instead walk up the steps and go out the door. Walk around the ledge for a Backpack. Then head back inside and go through the teleporter by the door.

This takes you to Secret 4, a dark building with 2 Cacodemons. Take them out and then pick up the ammo. Press on the wall in the middle to reveal another Cacodemon and the exit from this building. 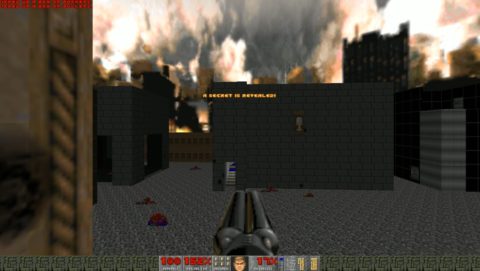 Collect the goodies and go through the teleporter. This takes you to the top of a building to the south-west. Run around the ledge until you can drop into the building. If you drop straight down you’ll land on a ledge with a BFG. Drop all the way down and take out the Cacodemon. Leave the building and go back to the corner building in the north-east.

Head through the teleporter again but this time when you’re on the ledge turn around and run to the ledge of the next building along. This is where the Revenants where stationed. 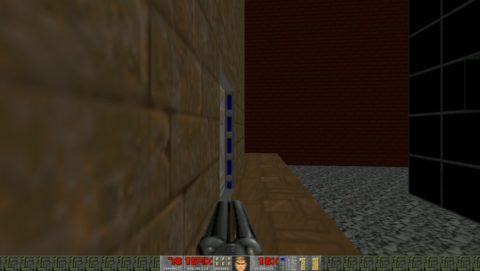 Enter the Blue Door, take out the Lost Souls from the door and then dash across to the Invincibility Sphere. Hit the Switch on one side of the small box to lower the platform with the Chainsaw. This is Secret 6. Go through the teleporter to the top of a building to the north. Take out the Imps and pick up the Red Key. Drop down to the ground.

Before you leave this area head to the back of this building and press on the wall in the center. It will lower down revealing a Mega Armor. This is Secret 7. 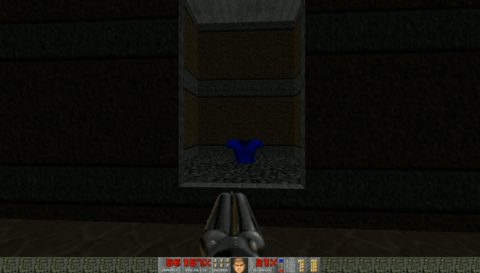 Run to the building to the north-west and grab the Rocket Launcher. Get out before the crushers squash you. Make your way to the south-east. Press the Switch on the side of the building with the lift to lower it and head on up. 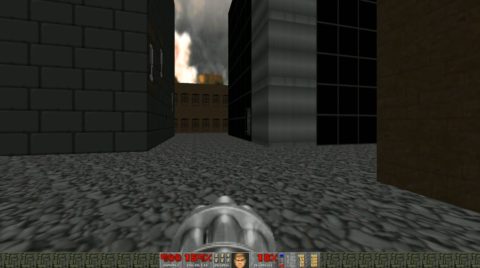 Open the door to the left and take out the Imps across the gap. Dash over the gap to Secret 8 with a Chaingun and Area Map. Drop down and enter through the Red Door of the building in the south-east corner.