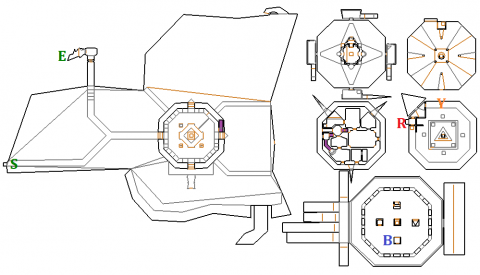 The Black Tower is a grueling map by Cranium with hundreds of enemies to face. It consists of four courtyards with a tower in the center. You will teleport to different levels of the tower to simulate climbing up to the top.

You begin in the western courtyard. Run forwards and quickly head down the steps to the north. Pick up the Super Shotgun and take out the Revenant. There are stacks of Medipacks by the doors leading to the exit if you get low on health. Take out the Cacodemons and other enemies in the courtyard and then enter the tower.

Climb up the stairs and take out the Barons of Hell up the top. The central platform has a BFG behind a teleporter. Before stepping into the teleporter open up the wall at the end of the staircase. The wall to the north hides Secret 1 with a MegaSphere. Just watch out for the 3 Imps behind the illusory wall.

The first floor is filled with Specters, Revenants on the corner ledges and  Cacodemons who will fly in through the windows. There’s also an Arch Vile in one cell and a Chaingunner in another. Circle around and take out all the enemies. Pressing on one of the bodies in the interior room lowers down a platform on the outside. One of them has a Plasma Gun but you’ll need to be quick to grab it.

This floor has lots of enemies in small rooms. Before you step off the teleporter pad turn around and open the wall behind you for Secret 2. Inside you’ll find a Cell Pack. Clear out all the enemies if you want and then open the door on the eastern side. Take the second door to the north and then west to find the teleporter to the next floor. There are two more secrets on this level but we’ll pick them up on the way back down.

In the center of this room you’ll find a SoulSphere and a Button. If you walk up to the center you may trigger the release of a number of Chaingunners and Barons of Hell. The walls around the central pool will also lift up. Press the gargoyle Button to lower them again. Deal with the enemies and then press the Button in the middle to lower the pedestal with the Yellow Key.

Use the Yellow Key to open the door with the green vines in the north east. Move close to the western wall and it will open automatically. Watch out for the Chaingunner inside. The lights of the room turn on automatically when you enter. Press the Button to reveal the teleporter in the center of the room. Go through the teleporter to the next level.

This room is filled with Barons of Hell and Specters. There are monster spawners all over the floor but you can’t see them. The monsters will teleport around the room like crazy. Try to hunt them down as quickly as you can. 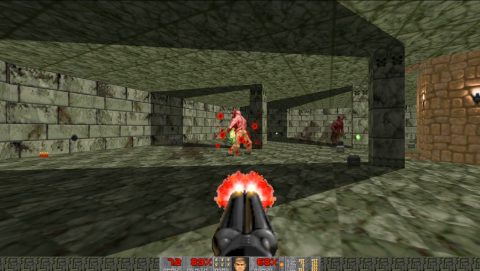 The Button on the south wall opens up the central teleporter back to the previous level. To progress you’ll want to open the small room on the north side. Be ready with your BFG because there are 2 Arch Viles inside. If they get loose on this floor they’ll cause havoc. As long as you survive there’s a MegaSphere waiting for you. Grab it and then head through the teleporter to the top floor.

You’ll be teleported to a small cubicle. Once you step out the door will be locked behind you. You can trigger all of the enemies at once if you want but it’s probably easier to deal with one group of enemies at a time.

When you step out you’ll see Imps surrounding the entire rooftop and Pain Elementals floating around. Clear them out and then open the south door on the western cubicle. Kill the Revenant and press on the bars at the back to open the northern cubicle and release a dozen Cacodemons.

Once the coast is clear go inside the northern cubicle and press on the face at the back. This opens up the eastern cubicle with another Revenant inside. A group of Arachnotrons will also teleport in.

Enter the eastern cubicle and press on the back wall. The south cubicle will open revealing a Cyber Demon. Hopefully you have some BFG ammo left over. Take him out and pick up the Blue Key. Grab all the ammo and health packs if you want and then press on the Skull Button to open the door to the central teleporter. Quickly take the teleporter to the fourth floor.

When you enter this floor after defeating the Cyber Demon four Pain Elementals will be here. A small room to the right with a SoulSphere is also open. Quickly take out the Pain Elementals before they spawn too many Lost Souls and then go through the central teleporter to the third floor.

Clear out the Imps and Cacodemon and go through the door in the north west. You’ll see a wall has opened revealing the Red Key and Computer Area Map. Grab it and then head through the teleporter on the eastern side.

A side wall has opened up with a small pit where two Cacodemons have been hiding. Take them out and then go through the doors to the outer walkway. Go to the western side and enter the room that has opened up just to the left of the passage that leads back to the first floor. 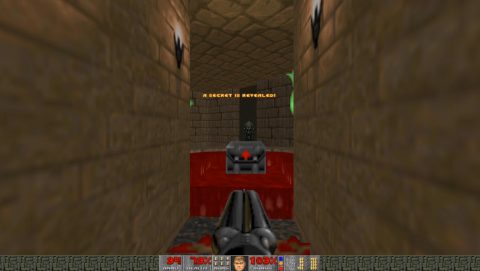 Step up onto the ledge with the pack until you hear something open behind you. Go back to the room with the skull button but watch out for the Specter. A room has opened behind the button. This is Secret 4 and contains only a Switch.

I think this switch lifts up a pillar so you can see another Skull Button on the ground floor. Clear out the room and take the teleporter back to the first floor.

When you return to the first floor there will be a large group of Imps and Chaingunners on the corner ledges. Take them out and then head through the teleporter in the middle.

Get ready with your BFG because Imps and Cacodemons will be waiting for you to teleport through. Head down the steps and carefully deal with the large group of Demons. Press the Skull Button that should now have been revealed from Secret 4. This lowers all the walls in the courtyards so you can get from one to the other.

Head outside and clear out any remaining enemies. There will be a few Spectres and a group of four Mancubus by the stairs leading down. Open the three doors at the bottom of the stairs and drop down to the lava below. Quickly open the door to the right and run through to complete the level.