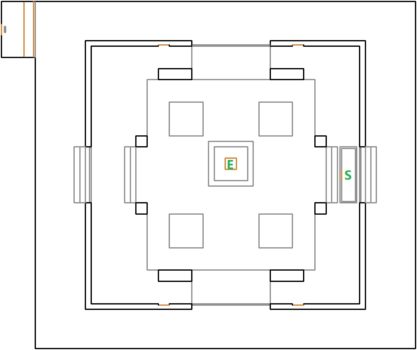 Dead Simple introduces two new enemies, Mancubi and Arachnotrons. Both are dangerous enemies that you’ll need to kill quickly or get out of the way. You begin in a small room with a Backpack and Super Shotgun. Press on the Button to lower the walls. You’ll find out you’re on one side of a large square arena.

On the pedestals and wandering around the middle you’ll find 7 Mancubi. This obese creatures shoot two fireballs at you. Usually they’ll shoot three times in quick succession unless they’re interrupted. Each Mancubus takes three or four rockets to kill.

Hide behind the walls around the outskirts of the arena when you want to dodge out of the way of incoming fireballs. There’s a Beserk pack somewhere in the middle which will restore your health to 100 if you’re getting low. There’s also a Megasphere on one of the pedestals. To lower the pedestals hit the Switches around the outskirts of the arena.

Once you’ve killed the last Mancubus four walls will open up around the outskirts, revealing 12 Arachnotrons. These deadly foe fire Plasma energy at you so keep moving.

Once you’ve killed the last Arachnotron a step will appear in the center of the arena. This is the one and only Secret for this level but is also the level Exit.