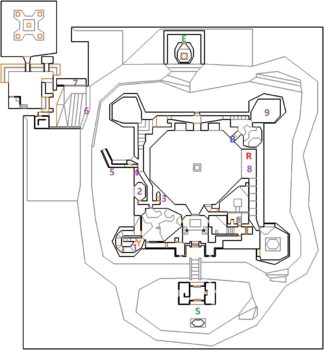 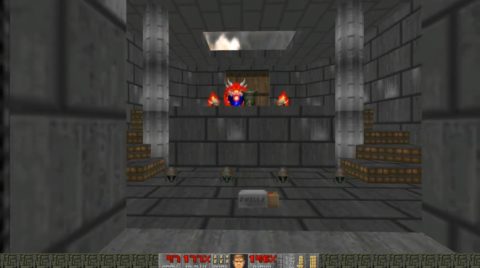 There are three doors in this room. The central one goes out to the courtyard but start by going through the door to the left.

In the next room the Button opens up the next two doors. Once again go through the door to the left. Go to the end of the passage and hit both Buttons. One of them opens the door that closes behind you. The other opens up a wall revealing a teleporter.

Go through the teleporter to arrive in a dark room. Quickly run up the steps and grab the Beserk pack on the right. Take out the Demons and then head down the other passage. Go to the left side of the passage and stand on the lift. It will take you up so you can continue along the passage. From here you can take out the Demons in a passage ahead. There’s also a window out to the central courtyard. You might want to take out the Arachnotron and Cacodemon from here. 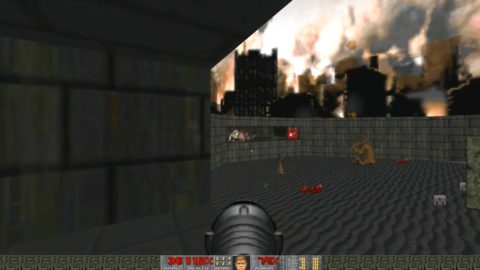 If you haven’t done a lap around the Citadel you can drop down the hole to the left which takes you outside. Just over the water is the room with the exit but you’ll need to find the three keys before you can get access.

Head back to the previous room, with the teleporter and turn around to go back the way you came. A passage will open up temporarily. 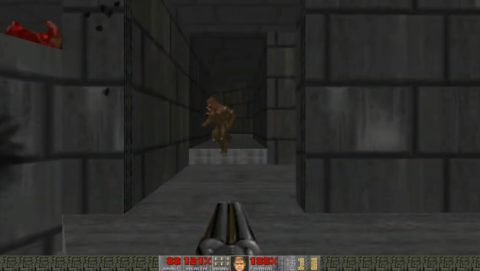 Go through and follow it around to the top. This is Secret 1. Grab the Yellow Key and press the Button to permanently open the doors in the room below.

Go through the other door with the lamp next to it. Head to the left for Secret 2 with a Invisibility sphere. Go back and then open the door to the right. There’s a Soul Sphere, Secret 3, just ahead but when you try to pick it up you’ll be teleported to an outdoor area. Take out the Imps in the windows and the Demons down below. A platform will lift up giving you access to the door. 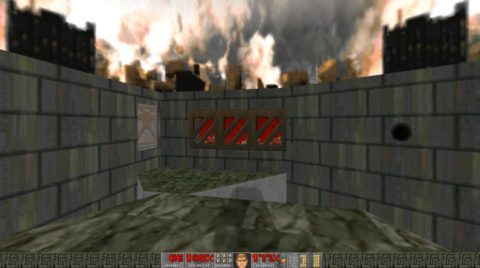 Go through the door and follow the passage along to the Red Key. Hopefully you’ve taken out the Arachnotron and Cacodemons but if not deal with them now.

Drop down into the courtyard and take out the remaining enemies. Head back to the front room and take a left and then a right. This time take the passage leading straight ahead.

Finding the lift is Secret 4, the passage ahead is Secret 5, and dashing across to the steps in the front of the red building is Secret 6.

Explore the passage on the left side first, hit the Button and take out the enemies. When you come back be ready to take out a dozen or so Zombiemen. The area they come from is Secret 7.

Explore the passage to the right and watch out for the crusher. Go up the stairs first and take out the Cacodemon. Press the Button to reveal more Imps and then go down to take them all out.

The room behind the crusher has Invincibility. Grab it and then quickly run to the far right teleporter in the other room. This takes you to Secret 8. Drop down and take out all the Demons.

When you’re done drop down the gap and pick up the Blue Key. Drop down to the courtyard. Go back to the starting room and this time take the door to the right (east). Take out the enemies and press the Button to lift up the steps. 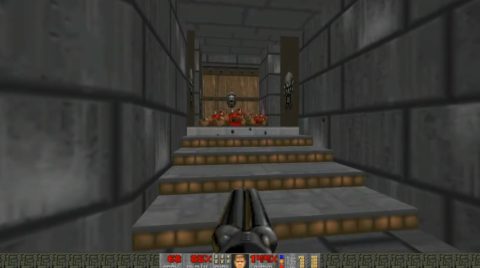 The door to the right takes you to one of the windows. Hit the wall between the two Buttons on the left and it will lift up. Walk up the stairs and hit the two Buttons a number of times until the platforms lift up. One has a box of rockets, the other lifts up a platform so you can get across to the Backpack and the teleporter.

Dash across to the Backpack, take out the Demons and then go through the teleporter. It takes you to the Soul Sphere that you couldn’t pick up earlier.

Once you’re done exploring head outside and run around to the back to the small building. Use the keys to open up the three bars and head through the exit teleporter.