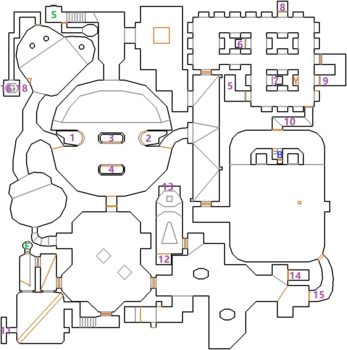 This is a large level with lots of enemies and secrets. You’ll need to conserve ammo as much as possible. From the Start open the panel on the wall on the right for some loot and then make your way down the hallway. This level is non-linear. The path is open to the room to the left (east) and the large circular courtyard to the south. Enemies will spot you and be drawn to your location from both rooms, including a Pain Elemental from the east room.

Press on the pillar in the room to the east and it will lower down. On top you’ll find 4 Specters, some Stimpaks and a Chaingun. Head to the courtyard to the south. When you get near the east exit Secret 1 will open, revealing a Pain Elemental and other enemies. If you have BFG ammo you can take them out now otherwise wait unil you’re ready. When you get close to the west exit Secret 2 will open. Inside are the same kinds of enemies. When you get close to the south exit Secret 3 and Secret 4 will open. Inside you’ll find Imps, Zombiemen and Shotgun Guys.

When the area is clear head to the east and then north to the north-east room. There’s about 50 Zombiemen and Shotgun Guys in this room alone. Carefully take them all out, pick up the Yellow Key in one of the central alcoves and then get ready for the next seven secrets.

Each of the walls with writing on it is a secret. Secret 6 and Secret 7 are in the center and Secret 5, Secret 8, Secret 9 and Secret 10 are around the edges. Secret 10 is activate by a nearby switch.

When you have cleared out the area go to Secret 9 and open the wall at the end. Step forwards to be teleported to the south west corner of the map. This is Secret 11. A Cyberdemon will be standing just in front of you.

Pick up the Backpack to the left and the Invincibility to the right and then use the BFG to take out the Cyberdemon. There’s plasma ammo along the wall behind him. The Cyberdemon may teleport out to the rooms to the north but he’ll quickly teleport back again.

When the Cyberdemon’s been finished off grab the next Invincibility in the small alcove and go through to the room to the north. Use Beserk to take out most of the Imps and Demons in this room to save ammo. This room has five exits. The exit to the west leads to the level Exit but you’ll need both the Blue and Yellow Keys.

Instead head to the room to the east and take out the Imps and Arachnotrons. Once the room is clear also clear out the small room to the north. The ledges on the north and south side of the room make up Secret 12 and Secret 13.

Head to the eastern side of the room you just cleared out and find the walls with the black marks on them. There should be two of them.

These are Secret 14 and Secret 15. One just has loot and the other leads to a large room to the north. Go through to the large room to the north and take out the Arachnotrons and Revenants. You may be able to get them fighting among each other. When the room is clear walk up the steps at the northern side of the room and a small compartment will open with the Blue key.

From here you could go to the Exit but there are three more secrets to unlock. Head to the caves in the western side of the map and clear out the southern and northern caves. The BFG and Rockets are preferred due to the large number of enemies.

Press on the symbol in the northern room to open a passage in the slime. Grab the Radiation Suit from one of the secrets in the central courtyard and head down the passageway. This leads to a Plasma Gun on a pedestal. Each step of the pedestal is a different secret so this pedestal makes up Secrets 16 to 18.

Make your way back down to the south and go through the Blue Door and Yellow Door to find the Exit from this level.