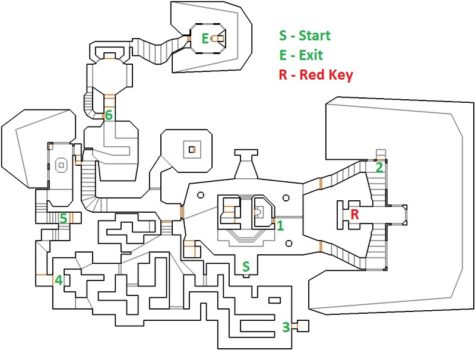 When you enter this level (S) do a lap around the room to clear out the 13 Zombiemen. Just to the left of where you started is a small room with a lift leading to a Box of Bullets and a Medikit.

Secret 1 is on the eastern side of the central rooms. Inside is a Backpack, Green Armor and a Switch that opens a door to Secret 2.

Head up the stairs to the east. In the central platform you’ll find the Red Key. On the northern side is Secret 2, a door that gives you access to the outside. Kill the Sergeants before picking up the Chaingun and Soul Sphere.

Use the Red Key to open the door on the western side of the starting room. Take the passage to the north with a central column in the middle of a room of slime. Pressing the Switch on the column opens the door to the maze to the south.

The maze is fairly difficult to navigate due to the lighting and strange floor plan. The two points of interest are Secret 3 on the eastern side which has a Backpack and Secret 4 on the western side. You’ll need to shoot the wall to open the secret door.

Head up the stairs and about half-way up open the wall on the right for Secret 5 with Armor Bonuses. Continue along the passage to a room with a Chainsaw.

Leave the maze area and head to the west and north, past the walkway. Secret 6 is just to the left between the walkway and the elevator. This takes you to a ledge overlooking the dark room where you’d end up if you took the lift.