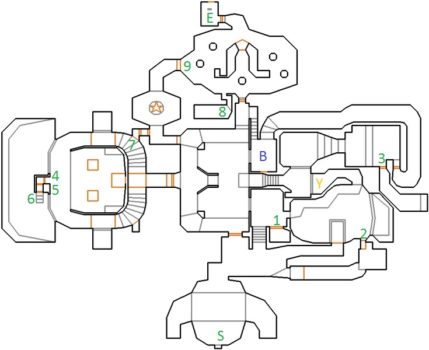 Phobos Lab is one of the most popular Doom levels. It has 9 secrets but many of them are close together so they’re not too difficult to find.

From the Start wait for the Demons to attack and the quickly run across the slime pool. Kill the Imps on the other side and run to the right. Go out onto the ledge overlooking another slime pool and the ledge on the opposite side will lift up.

Head back, take the stairs up on the right, shoot the barrels and open the wall behind them for Secret 1. Inside the alcove is a Shotgun. Walk out over the ledge you triggered earlier and into the room with the Yellow Key. From here you can look through a window to kill all the enemies in a neighbouring room.

When you walk back out drop into the slime pool and open Secret 2 on the other side of the pool. Inside is a Rocket Launcher and Blue Armor. You an follow the passage to the west back out to the starting area.

Open the door to the slime pool room and walk around the ledge to the yellow door to the west. When you open the door and activate the lift you’ll be attacked by a group of Imps and Demons. Just wait at the top for the enemies to ride up the lift. Once the path is clear take the lift down.

Secret 7 is accessed by taking the small lift half-way down the stairs to the north. Ride it up and open the wall to the east for a Box of Shells.

Continue around the stairs and alcoves will open on either side filled with enemies. Take them out and then open the secret across from the Switch. Open the wall to the south and then the next one for Secret 4, Secret 5 and Secret 6. In these secrets you’ll find a Radiation Suit, Chainsaw and Soul Sphere.

Go back inside and pull the Switch. The pillars will drop down revealing more enemies. You can ride the pillars up and then dash across to the high ledges for some extra loot.

Head back the way you came up the stairs and through the yellow door. The passage opposite the pool is now open. Dash across the slime pool and up the stairs.

Make your way around to a computer room. The computer to the south east next to the Switch is Secret 3. Inside you’ll find a Computer Map, Chainsaw and Backpack. The Computer Map will reveal the rest of the map.

Pull the Switch which is actually a door and go through the passage to a room with the Blue Key. You’ll need to make your way past a horde of Imps to get there but they’re more likely to hit themselves then you.

From here you can pull the Switch to open a door back to the slime pool room. Otherwise head down the steps and open the blue door to the north.

This room is almost entirely dark but if you hug the left wall you’ll find Secret 8 with a Light Amplification Visor. Once you’ve cleared this room open the wall to the west, Secret 9, which takes you back to the room you found in Secret 7. When you’re done exploring open the small room to the north, kill the three Demons and hit the Exit Switch.