E2M6: Halls of the Damned

Halls of the Damned Walkthrough 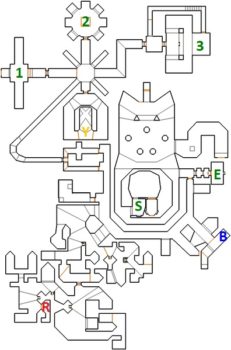 The Halls of the Damned features some of episode two’s most difficult traps. From the starting room go to the room to the east, kill the Cacodemon and flip the switch to open a new area from the starting room. Head out to the corridor and follow either path to the open area to the north.

Run across the slime and flip the switch to lift up a staircase to the Beserk pack. This also opens a corridor to the east. Run down the corridor and flip another switch which opens up the passage to the exit. Head back out, go south and find the blue exit door to the east.

You’ll need to find all three keys before finishing this level but the first key, the Blue Key is found in the passages just to the south. If you hit the switch in the second corridor to the left you’ll release the Demons. If not, the Demons will release when you pick up the Blue Key, making them much more difficult to deal with.

The Red Key is found in the brown maze area to the southwest. Go past the brown area first and open the door to the west to find Light Amplification Goggles. This will make navigating the brown maze much easier.

Carefully search around until you find the red key and then continue to the north. Head west around a long thin corridor to a hub room. The Yellow Key is found in the room to the south. The other three rooms each contain traps each count for one secret. The room to the east is a fake exit. The other two rooms release enemies when you enter.

When you’ve finished exploring this map make your way back to the real exit. A couple of traps will be opened when you pick up the last key, releasing two Barons of Hell and a group of Demons. Take them out, head back to the exit and use the three keys to open the real exit from this level.