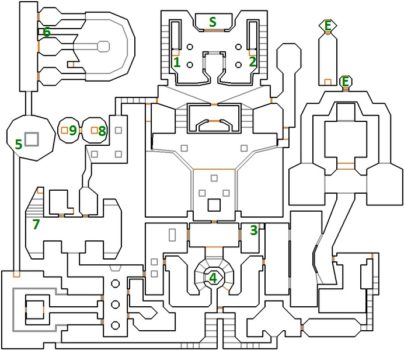 The Command Center is quite a large level and has a second exit to the secret level, Fortress of Mystery. From the start open the door, take out the enemies and move close to the walls at Secret 1 and Secret 2 and they’ll open automatically. Both of the thin secret rooms hold 3 Imps.

Go up the stairs on either side and clear out the next area. The rooms in the center, opposite the Demons has a Beserk pack. Just to the south is an outdoor area. The pools to the left and right each have a Cacodemon. When you approach the pillars two of them lower. Both of them have a Baron of Hell on top. If you’re careful you can encourage the Barons and Cacodemons to fight each other.

Open the room to the south and then the east. The wall to the northeast is Secret 3. Inside you’ll find a Chainsaw. Make your way to the south and go up the curved stairs. When you’re at the top a room will open halfway down with a Radiation Suit. This is Secret 4. Before picking up the Radiation Suit clear out the rooms to the east. The path by the vines leads to a room with a button. Hit the button to lift up a bridge leading to a Plasma Gun in the area to the northwest.

Head back to the curved stairs, pick up the Radiation Suit and go south. You can choose to go down the stairs too the left or right. Take the stairs to the left (east). There’s no secrets here but it eventually leads around to the regular exit. Clear out the area and come back the way you came. Pick up another Radiation Suit on the way back.

Go up the stairs and go down the other side. As you make your way around the slime a corridor will open up to the north. Follow the corridor to Secret 5, a Baron of Hell trapped in a cage!

Continue to the north and clear out the area. The central door leads to a bridge leading to a Plasma Gun. Drop down to the slime and pick up the energy cell pack to the north for Secret 6. There’s a teleport to the south that takes you back to the beginning of the level.

Make your way to Secret 7. The room just to the east of the fireplace is filled with Demons. Kill them and then flip the switch. Stairs will rise up to the fireplace. Climb up the stairs and go through the teleporter behind the fire. This takes you to Secret 8 and it’s a room filled with Lost Souls. Kill them and then open the door to the west for Secret 9. Go through the teleporter to the secret exit.