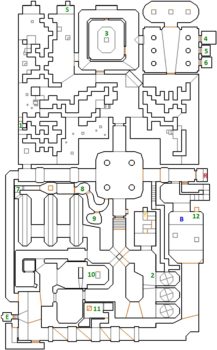 The entire northern section of this map is the cargo area and you’ll be short on ammo for most of it. If you hug the left wall you’ll come across a Beserk pack which greatly increases the power of your punches. It lasts for the entire level.

Secret 1 is on the southwestern side of the cargo area. You can see it in the intro gameplay. Open one of the cargo boxes to reveal the first secret with some shotgun shells.

Make your way to the central square room with Imps. Clear out the Imps and continue to the south. Hug the left wall to find the room with the Yellow Key. To reach it safely follow the path in the roof.

To find Secret 2 head just to the south and drop into the first circular pit. There’s an underground exit in the pit to the north. Inside you’ll find a long row of bonuses. The corridor takes you back to the central square room.

From here you can open the two yellow rooms to the north of the cargo area for more secrets. The large square room in the north has a few Demons. Kill them and then hit the switch to lower the Chaingun in the center for Secret 3. The large room to the east has a Backpack on a rising pedestal. Quickly run to grab it. Hit the three buttons on the pedestals to open the rooms to the east for Secrets 4, 5 and 6. Inside the central one you’ll find the Rocket Launcher.

Head back to the south and this time head to the west and north. Pass the three long rooms with lines of blue pads on the floor and follow the passage at the end for a Backpack and Secret 7. When you take the backpack the wall opens in front of you with Imps and Demons.

Go to the south and west. Search about for a room with a pillar with a switch on the side. Hit the switch to lower a pedestal with a Plasma Gun. Quickly grab it before the pillar raises again. This is Secret 10.

Head down to the southwest corner. This is near the exit but you need to raise a bridge by getting through the red door first. Head through the crushers to the east. In the middle there’s a secret passage in the north wall with a Chainsaw. This is Secret 11. When you pick up the chainsaw Lost Souls will be released.

Continue past the crushers to a room with the Blue Key. In the southeast corner is a lighted patch. Stand on it to briefly lower a wall across the pool with a Soul Sphere. It only lowers once so quickly run to pick it up.