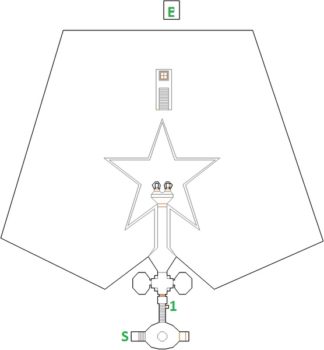 Flip the switch on the wall ahead of you and it will lower down, revealing a horde of Demons in front of you. When you blow up the barrels most of the demons will die in the explosion. The lift on the other side takes you to a ledge with a Computer Area Map and medpaks.

Down the steps to the north is this levels one and only Secret. Open the wall to the right for a Soul Sphere. Just to the north the hallway continues with rooms on either side. There’s one Demon in each room and more guns and ammo.

When you’re ready for the final battle take the lift to the north. Stand still when you’re at the top and kill any Specter that spot you. If you leave the lift area the Barons of Hell will awaken.

On Ultra Violent or Nightmare you can probably clear out 4 or 5 Demons before starting the boss fight. As you step forwards the doors will open and 2 Barons of Hell will attack. Each of the Barons has 1000 hit points and takes 5 rockets to kill. They’ll shoot green fireballs at you from a distance.

Try to clear out any remaining Specters because they may get in the way. Then focus down the Barons. They shouldn’t be too hard to take out with some well placed rockets. Once they’ve been defeated the walls will lower and you can drop down to the outside area.

To the north of the platform is a structure. Hit the switch to raise the steps and walk up the stairs. When you step on the teleporter you’ll be teleported to a dark room with enemies. It’s impossible to kill them all. When you die the episode ends.