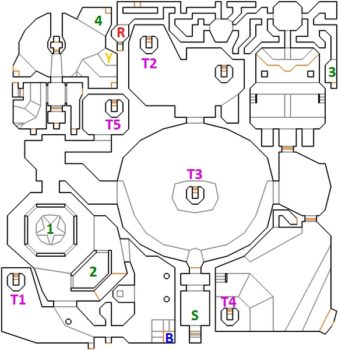 Gate to Limbo is fairly tricky given the number of teleporters that send you all around the map. I’ve numbered the teleporters by the order you should go through them, from T1 to T5. Secrets are numbered in green. You’ll need the Blue Key and then the Red Key before you can use the teleporters.

From the start quickly kill the Shotgun Guys, turn around and open the door behind you. Two Cacodemons will be released. They’re guarding a Backpack. If you don’t open the door it opens automatically when you leave this room.

Head out to the large circular pool of lava. Walk around the ledge to the right and you’ll be attacked by about 4 Demons. Enter the passage to the west and hug the right wall until you find the Blue Key.

Hit the two buttons on the southern wall, one of the is in the lava, to open the star-shaped room with a Soul Sphere. This is Secret 1. A group of Cacodemons will also be released from the same room. Head around the back of the room to the southeast to open Secret 2. It’s filled with Demons and Lost Souls.

Head back to the large lava pool and go through the passage to the east. There are two blue doors here. Go through the blue door to the  north. Take out the Cacodemons in the alcoves and then drop down to the lava tunnels to the north.

Go through the teleporters T1, T2 and T3. Pull all the switches along the way. One of them lifts up a bridge to the Yellow Key. When you see it drop into the lava, climb up the steps and go across the bridge to pick it up.

T4 is optional and can be accessed by going through the southern blue door. Walk into the small alcove to the north of the room and hit the button to lower the large wall with a Baron of Hell behind it. Kill the Baron, hit the button and then go through T4. This will take you to Secret 4 for some extra loot.

When you are done exploring this map make your way to T5 and go across the bridge to the exit.