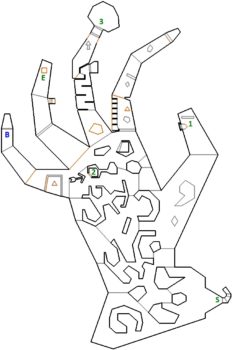 The Slough of Despair is shaped like a hand. You begin in the southeast corner of the map. This level isn’t all that difficult but you may struggle in the beginning due to a lack of ammo.

Once you’ve eliminated the wandering enemies make your way up the right side of the hand to Secret 1. Pass over the small lava pool and the wall to the north will lower, giving you access to the Chaingun behind it.

Check all the alcoves in the palm of the hand for a Rocket Launcher and Beserk pack. Looking at the map you can see what appears to be an arrow. This is pointing to Secret 2. Open the wall for a Plasma Gun and medikit.

The left finger is where you’ll find the Blue Key. When you pick it up a wall will lower releasing 3 Cacodemons. Hit the switch to lower a wall at the end of the finger for more loot.