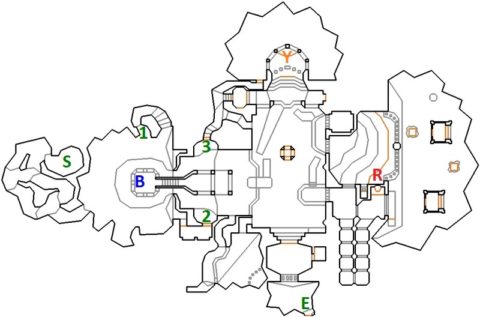 From the start make your way through the rocky passages to the large outdoor area in front of the building. There’s enemies around every corner so tread carefully. Secret 1 can be found just by a tree to the north of the outside area. The wall is only an illusion and you can walk straight through it. Up the top of the stairs you’ll find a Plasma Gun.

To get into the building you’ll need to take one of the passages in the lava. The passage on the left, when looking at the building, has a Radiation Suit on the ledge by secret 3. Pick it up and take out the nearby enemies. Make your way around to the other side and open the wall for Secret 2. Take the lift up to find a Soul Sphere.

Head back around to where you found the radiation suit and open the wall for Secret 2. The first passage takes you to a ledge overlooking the entire inner area. From here you can snipe out the enemies on the other platforms if you want. The second passage to the right has a Baron of Hell so use the BFG to take him out quickly. Hit the Switch and then drop down into the central room with lava.

You’ll need to move quickly here. The pillar in the center has a teleporter at the top. Depending on which side you use the lift you’ll be teleported to the ledge on that same side. Use the lift on the western side of the pillar and step into the teleporter. Run forwards and up the stairs to the Blue Key.

Drop back down to the lava and take the lift on the north side of the pillar. This takes you to the northern ledge. Hit the blue switch to open the barrier and release the Baron of Hell. Take him out and pick up the Yellow Key.

Now the yellow fence should be removed. You can dash across to another teleporter. This takes you to inside the room with the gate to the south. Take out all the enemies and pick up the Red Key. When you pick up the red key a Cyber Demon is released on the ledge to the south and ledges will rise up in the centrer room.

Quickly dash back over the ledges to the room with the colored fence. Drop down and open the door to the small building to the south. Kill the Cacodemon and Imp and press the Button. Teleport back up to the room above. Now the red fence will have lowered. Dash across to the ledge and go through the teleporter. This takes you to the ledge with the Cyber Demon!

Drop down into the lava and quickly go up the western lift. Go through the tunnel to the south that takes you to an outside area. Kill all the enemies and grab the Invulnerability. Quickly make your way back to the central pillar and go up the lift on the south side. This takes you to the ledge with the Cyber Demon. Run towards him and kill him before your invulnerability runs out.

Pick up any extra loot that you may have missed and make your way to the exit to the south.