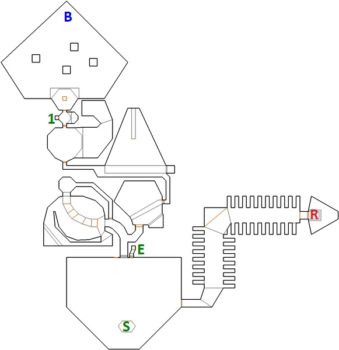 This secret level gives a unique twist to the first level of this episode, Hell Keep. Continue through this map exactly as you did the first time around. The one and only Secret is still in the same place, on the west wall before you open the door to the exit.

When you step onto the teleporter to end the level the walls will lower, revealing a larger courtyard and a Cyberdemon! There’s plenty of rockets here, as well as an Invincibility sphere which you can use to make this fight much easier.

Once the Cyberdemon has been defeated pick up the rest of the loot, including a Blue Key. Now you’ll need to make your way back through the level to the start, facing tougher enemies along the way.

Open the exit room door to find it inhabited by 2 Cacodemons. Take them out and then head to the next room for a Baron of Hell. Jump into the lava to find some extra loot.

The corridors that were filled with Demons are now an open courtyard with Specters. Pushing the button in the middle lowers the ledge and also opens an alcove to the east with more Specters. Leave the Invincibility for now. You’ll come back in a minute to pick it up.

Continue to the next courtyard and take out the Cacodemons. Drop into the lava and follow it around for more loot. When you’re done head back to the courtyard with Specters and pick up the Invincibility.

Quickly make your way to the start of the level and take the new passage to the east. You’ll be teleported to the intersection between two corridors. Three Cacodemons are in front of you and both corridors are filled with Shotgun Guys.

Make your way back to the large starting courtyard and use the Red Key on the thin door to the left of the larger door. This opens a small room with the Exit.