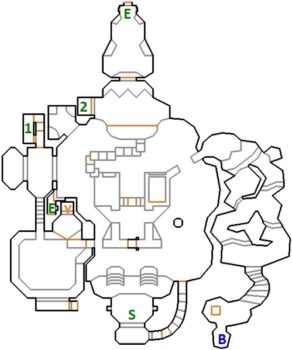 This is another very difficult level and I found it harder than the first. The most difficult part is the beginning when a group of Cacodemons make there way towards you from across the chamber. You’ll also need to be very careful that you have enough ammo to make it through the entire level.

From the start of the level you’ll need to act quickly. Take out the Shotgun Guys and a few of the Imps. Shoot the Cacodemons as they approach and try to keep them away from you or you’ll be overwhelmed. If you run out of ammo you’ll need to change tactics slightly. Between the two half bridges on the starting platform there’s a Radiation Suit. When you get close to the edge a Cacodemon is alerted. Either kill it or dodge around it. Drop down to the Radiation Suit and run forwards to the right and turn left to find a Soul Sphere.

Run back to the starting platform and go up the tunnel just to the left of where you picked up the radiation suit. You’ll find some ammo along the way. As you approach the top the wall will open. Take out the Imps and Specter and run all the way back up to where you started. You should have a little more ammo now if you need to finish off any remaining enemies.

Dash over to the left platform and press the button on the pillar. This opens a door to the west. Take out the Shotgun Guys and Imps and then drop down to kill another Imp.  Walk into the small triangular area of lava to open up a passage to the north. Press the button on the wall and quickly run backwards to get on the ledge before it rises too high.

The safest way to make it through the next section is to look through the small passage that you opened and kill the Shotgun Guys. Jump over the small gap and pick up the Plasma Gun. This triggers the release of four Barons of Hell! Quickly jump down into the passage and go up the stairs. Run forwards and open the wall just to the left of the teleporter. This is Secret 1. Pick up the Beserk pack and open the next wall behind the teleport. Go through the teleport before the Barons catch up with you.

You’ll be teleported to a higher ledge. Grab the Blue Armor, kill the Demons and then dash across to the ledge below. Two of the Barons will teleport to the beginning area and there’s  still four Barons in the room to the right. Now you have the Plasma Gun you can use it to take them out fairly quickly. Enter the room to the right and pick up the Yellow Key that the single Baron was guarding.

Drop down and go up the stairs. If you’ve killed all the Barons you can now explore this area in peace. Go through the teleporter from this side which takes you back to the start.

Dash across the platforms on the right side and press the button. A wall opens on the next platform releasing Barons of Hell and Lost Souls. Take them out and then dash across to the hole in the wall leading to the cave.

This cave area has a few Cacodemons, two Barons and Specters. Near to the stairs to the south you’ll find some cell packs. Pick them up and then walk up the stairs. Up the top is a room filled with Lost Souls. Take them out and then kill the Baron in the small room to the left. He’s guarding the Blue Key. Grab it and go through the teleporter back to the start.

Dash across the platforms on the left side and open the blue pillar. Quickly run up the stairs, grab the Radiation Suit on the right and drop back down to the lava. When you go up to the top platform a pillar opens between the two platforms. Go around to the start, dash across and go through the teleporter. You’ll land on the Cyber Demon, destroying him.

Take out the Cacodemons in the end room but don’t go through the exit if you want to find the secret exit. Walk back down the stairs and go through the teleporter again. Quickly grab the other Radiation Suit and drop down on the right side (west side). Go through the door to the Secret Exit. It only stays open for a few seconds so you’ll need to go quick.