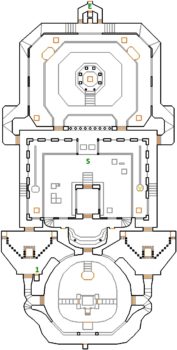 Fear is the secret level for episode 4 and is much easier than the previous two levels. The most difficult part is the beginning where you’re thrust in the center of a group of enemies. Once you get a foothold the rest of the level should be relatively easy.

Clear out the enemies in the beginning area. There’s a Baron of Hell behind two barriers to the north. You can kill him now or wait until you open the barriers. Climb up the stairs to the small room to the south and push the two switches. These open the barriers. Take out the Baron and any remaining enemies to clear out this area.

On one side is a thin ledge that leads to the Yellow Key. Pick it up and go back along the ledge the way you came. Don’t drop down to go through the teleporter. It teleports you into a cage with a Baron of Hell! The other thin ledge has a Plasma Gun at the end of it.

From here you can actually head straight to the exit in the north but you’ll miss a secret. There are triangular rooms on either side to the south. The one to the west has a secret in the wall once you take a lift up to the higher level. Inside is Secret 1 with a Beserk pack.

There’s quite a few enemies inside the circular room and in the passages surrounding it. Inside you’ll find a Rocket Launcher on a platform. Drop down to the blue floor on the other side to find another Rocket Launcher. Take the lift back up.

Head to the north and clear out the northern area. The Exit is far to the north. Before you go through open up the wall to the south of the exit for Secret 2. Inside you’ll find a Backpack.