Drawing of the Web

Drawing of the Web

Bring Duran to Each of the Five Beacons
Duran Must Survive

For this mission the Protoss have installed an electromagnetic field that prevents the Zerg flyers from entering the atmosphere. You’ll only be able to used ground troops for this mission. Duran must reach each of the 5 beacons in order to overload the power grid and create an explosion.

There’s no need to destroy the entire Protoss force. You’ll only need enough of a distraction at each site so that Duran can reach the Beacon and get out of there alive.

You’ll need to place Sunken Colonies at both the southern and northern side of your base. Once you upgrade to the Hive you should also be able to place Spore Colonies. You’ll need a few but most of the attacks will be with ground forces.

Make sure you take advantage of the mineral patches to the north and south of the starting base. The southern patch also has a vespene geyser for the much needed gas. Defend these outposts with Sunken Colonies and a few Hydralisks. The Protoss may target either of these outposts.

Luckily the Beacons aren’t too heavily defended. Start by building a force of 8-12 Ultralisks, 12-24 Hydralisks, 1-2 Overlands and Duran. This will be all you’ll need for each of the Beacons and to destroy the Protoss outpost in the bottom left corner of the map.

Start by heading for the 2 Beacons on the right side of the map. Send in the Ultralisks first, followed by the Hydralisks and then rush Duran to the Beacon while cloaked. Bring him out again and then withdraw all of your units. If you take any losses replenish them before moving on to the next Beacon.

Next head for the Beacon in the center lower portion of the map and then sweep over the bridge to the west to take out the Protoss outpost. You can set up  your own base here if you like but the mission is almost complete.

Head north for the final two Beacons, proceeding as before, with the Ultralisks and Hydralisks going in first to create a distraction. You will need to make sure the Overlords are nearby to see any cloaked Templars. Once Duran reaches the final Beacon the mission will be victorious. 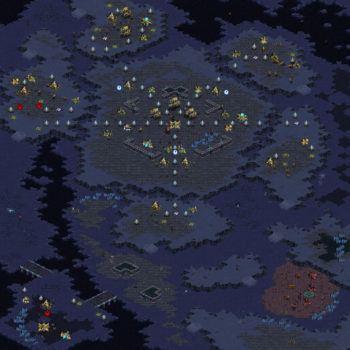