After the Zerg Overmind was destroyed at the end of the last episode, thanks to Tassadar’s sacrifice, the remaining Protoss forces attempt to flee to Shakuras. For this mission you’ll have a limited number of units and no base construction to worry about.

This mission is fairly easy and serves as an introduction to Brood War. You can actually just select all of your units and have them attack-move to the bottom right corner of the map where the warp gate is located. Make sure you also attack-move all the new units that you come across along the way. You’ll need to keep Zeratul alive so keep an eye on him.

For a slower approach split your starting units, Zeratul, 6 Zealots and 3 Dragoons, into three groups. Zeratul is tough enough to take out most units by himself so let him lead the charge. If he gets into trouble pull him back and let the other units help out.

When you’re approaching the southern edge of the map you’ll be warned by 2 Zealots that the Zerg are attacking. Follow them to the south and help the Zealots win the skirmish. The Zerg have access to Nydas Canals that will produce a steady stream of Zerglings. Sneak Zeratul past the front lines and destroy the Canals. Hopefully some of the Zealots will survive and you’ll have more than you started with.

Continue to the east until you come to a junction with one path heading north and the other east. Both paths lead to the same place but you’ll find some reinforcements if you take the eastern path.

Continue around and up to the north. You’ll have to destroy a Sunken Colony and a Spore Colony along the way. There’s also an Ultralisk Cavern with 2 Ultralisks wandering about. Target them with all of your units one at a time to kill them quickly. Once you reach the northern side of the map you’ll find a Protoss Stronghold where you can regenerate your units and find a few more reinforcements, including an Archon. There are 2 Templars here which you can merge into a second Archon.

The last stage of this mission is to head south, along the eastern edge of the map, all the way down to the Warp Gate. You’ll come across more Zerg forces including another Nydas Canal. You can either rush Zeratul down to the Warp Gate or bring them all along together.

Once you reach the Warp Gate you’ll be joined by Jim Raynor and Fenix before a large force of Zerg attack. You’ll hop through the gate and the mission will end. 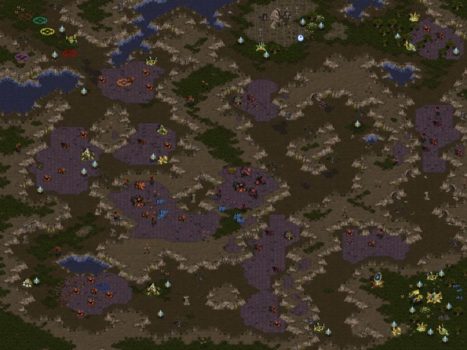