The Protoss are divided and Aldaris has turned against the Matriarch. He’s taken the High Templar with him so you won’t be able to build them in this mission. Instead you’ll have the Dark Archons which can use their Mind Control ability to make enemy units switch sides permanently. You can build up a large force just by using this ability.

You begin with an established base on the southern edge of the map. There are two areas you can immediately expand to, a mineral patch to the west and one to the north-east.

Aldaris has created 2 illuions that look like him. The real Aldaris is the one in the middle on the northern side of the map.

This mission is actually pretty easy using a group of Scouts. First build Photon Cannons around your base to protect from attacks. Save your Dark Archons Mind Control ability for any Archons that you spot. Warp in 3 Stargates and start pumping out Scouts.

Once you have a full group of Scouts fly them across to the west and then hug the side of the map all the way to the north-west corner. From here it’s just a short fly over to kill the real Aldaris. 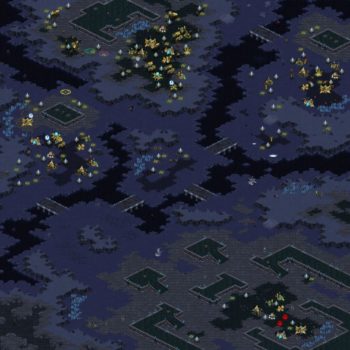