When the Dropship drops off Duran at your small base get the SCVs harvesting minerals and build a few more from your Command Center. After a minute your sensors will detect 4 nearby Zerg bases and you’ll be given the additional objective to destroy all of the Zerg Hives.

There’s a small mineral patch and vespene geyser to your south-west that you can expand to right away. You’ll need to build some defenses here, a couple of Bunkers and Missile Turrets because the Zerg will target this outpost.

The brown base is the closest and should probably be your first target. You’ll only need Marines and Medics for this one. Two groups of Marines and a few Medics should be enough to push through and destroy the Hive. Once the Hive has been destroyed all of the brown Zerg forces will become dormant so you won’t need to destroy the entire base.

Continue building Marines and bring them straight up to the orange base. You should have around four groups of Marines with Medics as support by now. Easily enough to make a bee-line for the orange Zerg Hive. Once it’s destroyed the orange units will become dormant.

By now the red base will be sending out attack forces to your base so make sure you build some defensive structures and leave a few units behind to protect your base. The red base like to send out Ultralisks so be prepared for a ground attack.

Take your units and sweep across to the west to destroy the red Zerg Hive. The last base is on a raised plateau so you’ll need to build a few Dropships. There’s a safe place to put your units on the south-eastern edge of the plateau. Two groups of Marines with a few Medics should be enough to destroy the purple base.

Once all the Zerg Hives have been destroyed bring Duran to the Psi Disruptor to complete the mission. When Duran arrives other Ghosts appear to tell you Duran has been relieved and they’ll take care of its deconstruction. 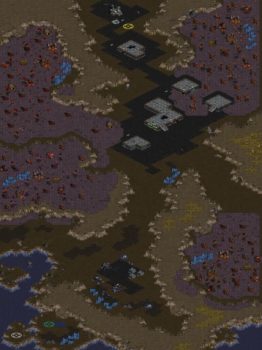