The Protoss are working with the Zerg on this mission so you’ll have 2 bases to look after and plenty of options for troop choices. The Khalis Crystal is in the south-east corner and the Overmind is in the south-west corner. The Protoss base doesn’t have a gas vent so you’ll need to use the Zerg Drones for gathering gas.

There are two expansions that you should think about, one directly to the south of the Zerg base, it’s undefended so you can move there straight away, and one to the west of the Protoss base which is lightly defended.

If you decide to go for the Khalis Crystal you don’t need to expand to the western mineral patch. Build a few groups of Dragoons, Hydralisks and Zerglings and clear a path down to the crystal in the south-east corner. Send a Drone or Probe behind them and pick up the Khalis Crystal when the path is clear.

After expanding to the western outpost the Overmind is directly to the south. Warp in about 8 Carriers, upgraded with extra Interceptors, and fly them down to the Overmind while hugging the western side of the map. Ignore all other forces and just head straight to the Overmind. You should be able to take it out pretty quickly. 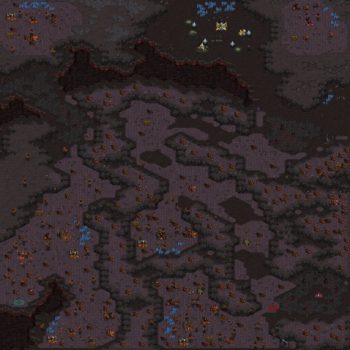