To Chain the Beast

To Chain the Beast

Bring a Medic to each of the Beacons surrounding the Overmind

Before you can reach the Overmind you’ll need to deal with the three Cerebrates. Each Cerebrate provides powerful and unique abilities to their hive. The Red Cerebrate will make the Red Sunken Colonies invulnerable. The Brown Cerebrate spawns an Ultralisk called Torrasque every few minutes. The Orange Cerebrate will send out Infested Marines once you destroy the other two Zerg Hives.

You have a small base over the cliffs to the east. You can’t get their by land at the moment because of the invulnerable Sunken Colonies but when you get the chance build a Dropship and drop off an SCV or two to build a Command Center and to start harvesting the minerals there.

Once you kill the Cerebrate the rest of the Zerg Hive for that color will go dormant. The easiest way to snipe them is with a group of Battlecruisers. Keeping a group of 12 should be all you need to complete this mission.

While you’re building your Battlecruisers you will need to defend your base from numerous attacks. Keep a couple of Bunkers on the east side of your base to deal with the Torrasque when it arrives.

Bring your Battlecruisers directly north to the Red Base and take out the first cerebrate. The rest of the red units will go dormant and you can now destroy the Sunken Colonies.

Killing the other 2 Cerebrates is easiest when you approach them from the north side. Take your Battlecruisers all the way to the northern edge, east until you’re above the Orange Cerabrate and then quickly kill it. From here you can safely fly your Battlecruisers until they’re just north of the Brown Cerebrate.

Once the three Cerebrates have been killed you’re free to send your Medics to the Beacons surrounding the Overmind to complete the mission. 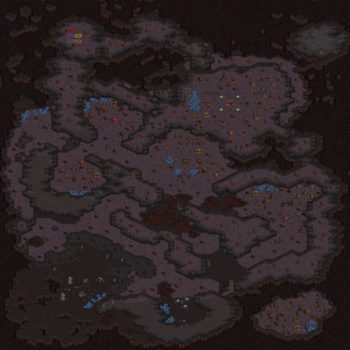