Fury of the Swarm

Fury of the Swarm

The stated objective at the beginning of the mission is to destroy the Zerg. This will change after a few minutes once Kerrigan realizes the UED have scientists nearby who are trying to control the Zerg.

You begin the mission with a main base on an island and four expansions ringing the outside. This won’t last long however, as the Zerg will quickly invade and destroy all of your outposts. Move the Overlords from the outposts to try and save them. The Overlords to the top and bottom of the map can stay just out of sight of the Zerg without being attacked.

With the loss of your expansions you won’t have many resources now so researching and building your army might be difficult. As you’re on an island flying units might work best. They’ll also be good for hunting down the UED Scientists.

Taking Back the Expansions

You’ll need more resources but you won’t need to take back all four outposts unless you want to. Pick either the north or south side and start building up a force. Take over the easternmost outpost first. You should only need 4 or 5 Guardians with a few Mutalisks or Hydralisks. You can transport the Hydralisks over with the Overlord ability.

Build a Nydus Canal connecting the island with your main base to your expansion so you can easily transport troops from one to the other.

Once the outpost is set up gather your forces and head for the other one, either to the north or south, depending on which side your reclaiming. These outposts are better defended so you’ll need more Guardians and other units to deal with them.

The Terrans and Zerg will drop units off on your main island periodically so keep it defended with Sunken Colonies, Spore Colonies and other units. The Zerg may send Guardians of their own after your main base so keep some Mutalisks close by to deal with them.

Hunting Down the Scientists

If you used fliers to take back the outposts you should have the necessary units to hunt down the UED Scientists. Fly them to the Terran base to the west and slowly sweep through the base with your Guardians and Mutalisks. Once you’ve found and killed all of the Scientists the mission will be complete. 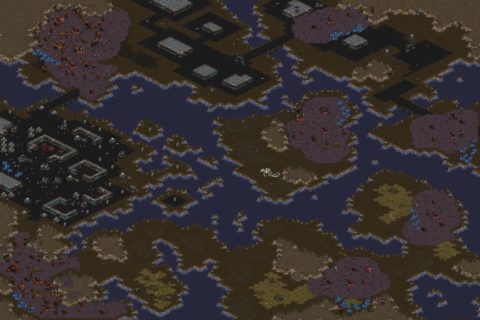