Bring Kerrigan to the Uraj Crystal.
Kerrigan must survive.

You begin the mission with 3 Shuttles dropping off 3 Reavers and 3 Dragoons into battle. You should be able to quickly clear this base. Another Shuttle will fly in and drop off 4 Probes and Kerrigan so you can begin building a base of your own.

The Uraj Crystal can already be seen on the map in the south-east corner but it will take a while before you can build up a force big enough to clear a path to it. Build Photon Canons by the ramp on the southern edge of your base as the enemy will send ground units this way.

Build 12 to 18 Dragoons and start demolishing the Red Terran base to your south. You can build a Shuttle for your Reavers and quickly move them in and out of battle for maximum damage. Once the Red base has been destroyed build a second outpost here for the minerals. Make sure you fortify the southern edge of this outpost as attacks will come from this direction as well. Also have a few Photon Cannons around your main base as occassionally the Red Base will send out a wave of Wraiths.

A force of around 2 to 3 groups of Dragoons should be enough to make the final push to the Uraj Crystal. You’ll need to continue heading south first and then east. Once the path is clear bring Kerrigan to the Beacon to complete the mission. 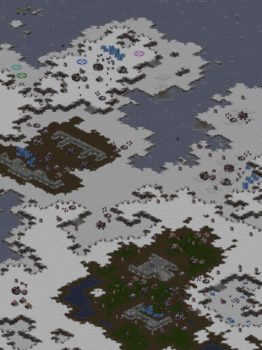