If you’ve yet to stabilize the floor in the small room with the White Carved Tile on the wall see the ending of the last level (Coastal Ruins) for details on how to progress to the main part of the Catacombs.

Go through the door to a small 4-way junction with a pole going down a hole in the center. Ignore the pole and take the passage to the right to a room with jars. Run to the Golden Bird Statue on the far right side and wait for the Ice Elemental to destroy itself.

Run back out to the 4-way junction and slide down the pole. Run down the corridor and when you get close to the end the wall will lift up. Run forwards and pull the Lever which lifts up all of the walls and you find yourself on a high ledge in a large room with 2 dangling ropes. 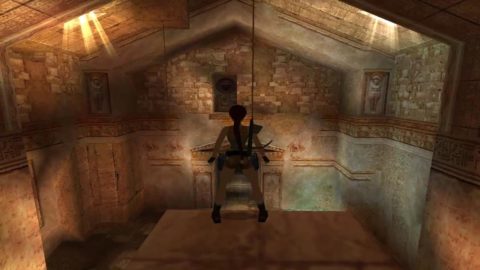 Drop through the gap and you’ll slide down into some water. Swim over to the steps just ahead and pull up into another large room. 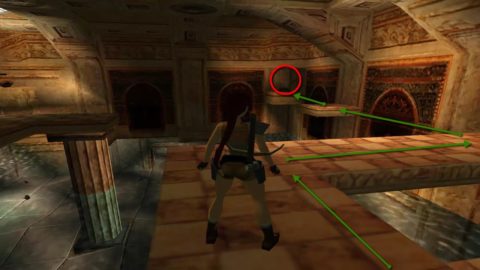 Drop down into the water and swim through an underwater opening with a Golden Bird Statue. Wait by it until the Ice Elemental is dispersed. Now climb back up the steps to the higher ledges. Another Skeleton may be waiting for you on the central platform. Kill him and then take a running jump onto the central platform. 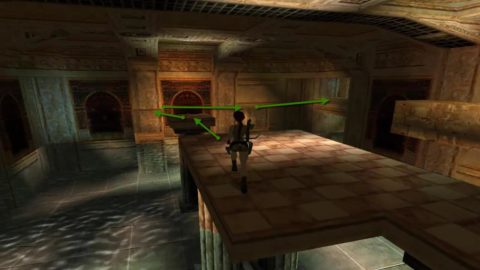 Run diagonally off the other side of the ledge onto a slightly lower block in the wall on the left side. Drop backwards, grab onto the edge and traverse across to the right. Keep going around the corner until you can drop down onto a ledge. Run towards the jars and around the corner to the left to a new room with a rope and pedestal.

The jar near the entrance will have Shotgun Shells (Wide) and a Skeleton on one of the other ledges will wake up when you enter. Take a running jump to grab onto the dangling Rope and then swing over to the central column with the pedestal. Take the First Trident and then jump ahead to the ledge on the opposite side of the room on the right. 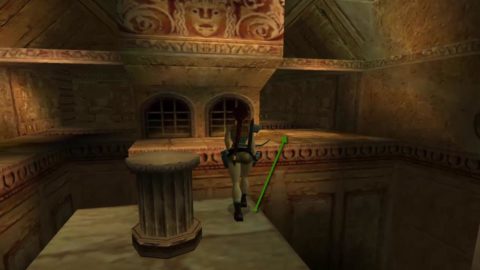 Climb back up the ladder and jump over to the right (western) side. Climb up to the ledge above and grab the Large Medipak. As you do 3 Skeletons will appear on the ledges below. Either shoot them safely from up here or drop down to take them out.

Jump over to the northern ledge on the left side and jump over the gap. Climb up the ladder in the far left corner to the top. Run up the stairs to a room with a Pole and Trident

As you enter the room you’ll be attacked by a Skeleton. Blow him up and then pick up the Second Trident on the pedestal. Climb up the Pole and backflip into the room above. Break the jars for Explosive Arrows.

Continue climbing the Pole to the passage above. Run along it to the end and a door will open automatically as you approach. Heading through will take you back to the original 4-way junction in the beginning. A Skeleton will attack you from the opposite passage as well.

Jump to the Pole in the center and slide down to the bottom. Walk towards the massive room and a Skeleton will appear. Turn right at the end of the ledge and take a running jump to the Ladder on the side wall. Drop to the ground level and kill the 2 Skeletons sneaking around down here.

Run towards the other side of the room and just before a small pool in the right corner there’s a small Ladder. Climb up it and run down the stairs. Take a left, go past the opening on the left and enter the opening on the right. Take a right and then go down the steps to the left. 2 Skeletons will wake up as you approach. You can kill them both with an explosive arrow. This will break the jars as well and one of them contains Uzi Clips.

Go back the way you came and enter the first opening on the left that you ran past. It’s now on your right. You’ll be attacked by a Skeleton as you enter. Run all the way around the corner to the right and enter the small alcove with jars. You may as well kill the sleeping Skeleton before it wakes up and then climb up the climbable wall at the end. 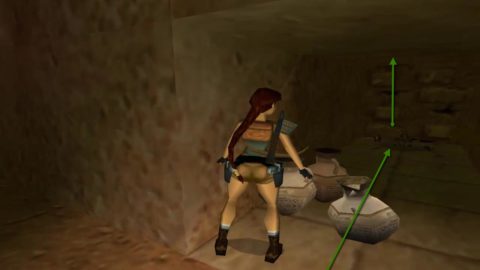 Climb up to the top for Shotgun Shells (Wide). You’re now on the middle level of the Huge Room. Jump across to the next ledge. A Skeleton will appear as you jump across. Run to the right and then jump over to the alcove with the Large Medipak. 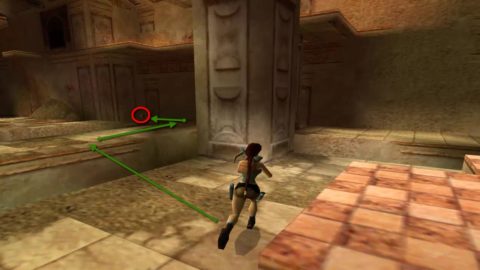 Climb the ladder and get off on the ledge to the left. Pick up the Shotgun Shells and enter the small room for the Third Trident. Make your way across these higher ledges to the other side of the room and jump across to the Rope in the far right corner. 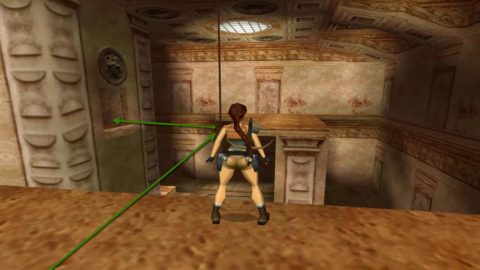 Climb up the Pole and backflip into the room above. Kill the sleeping Skeleton before it wakes up and climb up the Ladder. Run down the corridor all the way to the Fourth Trident on a pedestal. There are a number of sleeping Skeletons that will wake up once you take the Trident. You may want to kill them while they’re still sleeping.

For the next secret you’ll need to destroy all of the white piles of bones in the pedestal room and in the corridor. There are five of them in total. Once you have destroyed them all a hatch will open up in the pedestal room on the left side. Drop down for Secret #2 where you’ll find Explosive Arrows. You’ll also be shown a cut-scene of a brown door opening in the Huge Room.

Climb out, run back down the corridor and drop down the hole at the end. Slide down the Pole and take a running jump back to the ledge you came from. Now you’re back in the Huge Room on the top level. Take running jumps across to the far left corner where the Brown Door is located and go through for Secret #3 where you’ll find Explosive Arrows, Shotgun Shells (Wide), Shotgun Shells and a Large Medipak.

Jump back over to the ledge behind the massive pillar and drop down to the mid-level ledges. Jump across to the next ledge along and drop down on the other side to the ground level. Turn left and enter the small room, which is actually a lift.

When the lift stops climb into the opening and follow the passage for Secret #4. Shoot the jar for a Large Medipak, Explosive Arrows and Shotgun Shells (Wide). The way out is up the ramp on the left. Drop down to the mid-level ledges and then to the ground level.

Head back up the stairs the way you first entered this area and drop down to the room with the small pool in the corner. Run up the steps to the left of the small pool to finish the Catacombs.

Next: Level 16 (Temple of Poseidon)