Turn left and climb up the blocks to the other side of the wall. You’ll be in an open courtyard with an obelisk in the center. To the left are 3 golden doorways, ahead is a hallway and to the right a broken wall that you can jump through.

Two Black Scorpions will attack as you enter the courtyard. They have a chance of poisoning you if they land a strike. There’s also a Small Medipak at the foot of the obelisk.

Drop down into the gap by the shells and then drop down once more. Crawl through the gap to the room with pillars and kill the Black Scorpion. This is Secret #1. Shoot the jar ahead for Shotgun Shells. Enter the room on the left and take out 3 Black Scorpions. Inside the jars you’ll find a Large Medipak, Shotgun Shells (Wide), Uzi Clips and Flares. Head back to the courtyard with the obelisk.

Approach the hallway but before going in climb up the small block and then take a standing jump onto the flatter section of the sloped block. Jump diagonally across to the right to grab onto the roof above the hallway. Pull up for some Shotgun Shells (Wide). 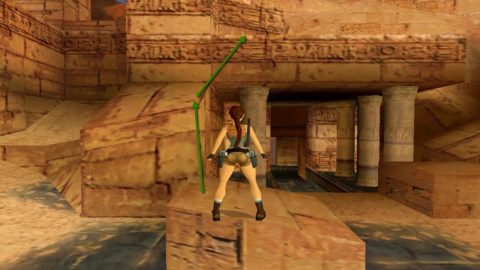 Drop down and enter the hallway. As you run forwards you’ll notice a closed grey door to the right. This is the level exit. For now continue forwards. The camera will look up to show where you need to go. Climb up the block on the right and then grab the ledge above and pull up.

Jump back across to the open gates and pick up the Small Medipak and Shotgun from the left gate and the First Canopic Jar from the right gate. When you pick up the jar you’ll get a vision of a ceremonial chamber.

Drop back down to the hallway and dive into the deep pool. Pick up the Flares at the bottom and then pull back up for a breath.  Dive down again and go through the gap in the wall. Follow it down to a door with a grey center and open it by using the action key on the grey center. Swim around the corner to the left and pull up in the hole in the roof on the left. Get out and pick up the Uzi Clips, Large Medipak and Poisoned Arrows. This is Secret #2.

Dive back in and continue forwards to the next room. There’s a small gap on the left wall as you enter. Swim through for Secret #3 where you’ll find a Large Medipak, Uzi Clips, Poisoned Arrows and Shotgun Shells (Wide). If you get stuck on the walls you may need to quickly swim back for air.

Swim back out to the hallway and make your way back to the courtyard with the obelisk. Turn to the left and climb up the blocks and go through the broken wall to the two-story building with the red-lined ledge.

Pick up the Small Medipak from the right side of the building. Turn around and walk across to the other side. Pick up the Shotgun Shells and Uzi Clips along the way. Drop down to the left of the uzi clips to the room below.

There may be a Black Scorpion wandering around. Jump up to the block in the far left for Flares and then drop down the hole between the blocks. Follow the short passage through to the ceremonial chamber you saw in the vision.

Turn to the left and between the columns you’ll see a small crawlspace. Climb in and follow it around for Secret #4 with 2 Uzi Clips and Flares. 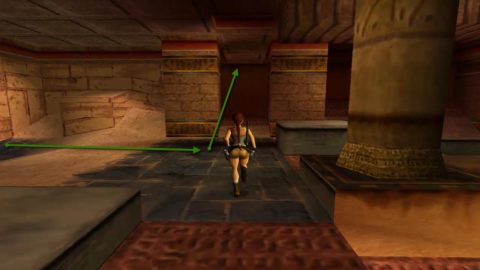 Crawl back to the chamber and take a look around. There’s a pit to the left with a Black Scorpion, steps leading down in the middle and a pit to the right with another Black Scorpion and a Small Medipak. Grab the medipak if you want and then climb back out. Jump up to grab the railing on the roof and monkey swing across to the other side.

Drop down, kill the Black Scorpion and then climb up the platform on the left to push the Button. This opens the door behind you and releases another Black Scorpion.

Go through the door you just opened and investigate the square hole which lowers the ceremonial bowl at the end of the steps behind you, leaving a hole in its place.

Safety drop down the hole and then grab the Large Medipak on the pedestal. Turn around to face the water and you’ll notice two openings, one to the left and the other to the right. Run through the left opening and place the First Canopic Jar in the small hole on the right. This opens the level exit.

Go back and run through the right opening. Drop into the still water and pick up 2 sets of Shotgun Shells. Swim out and you’ll be taken by the current back to the ceremonial bowl.

Climb out, jump over the bowl and climb into the crawlspace up in the wall to the right. Follow the windy passage around to a room filled with sand. Jump up the sand and go through another crawlspace. This takes you back to the red-rimmed building. Climb back out to the courtyard with the obelisk and enter the hallway. Go through the now-open grey door to finish the level.

Next: Level 8 (The Great Hypostyle Hall)