Level 34: Inside the Great Pyramid

Inside the Great Pyramid

Run down the main tunnel with the hand rails and take a running jump across the pit diagonally from the right side to land on the left side. Shoot the Guard further down the tunnel and the Assassin who attacks from the right.

Time your jumps to make it past the 2 sliding walls to the room beyond with a large metal basin. Inside the room you’ll be attacked by 3 Wild Dogs.

Walk around to the back of the metal basin where the side has collapsed and go inside to pick up a Small Medipack and a Torch. Light the Torch with one of the lit torches and go around the room lighting all of the unlit torches. Once all of the torches are lit the alcove to the west side of the room will open.

Drop the Torch, enter the alcove and pick up the Shotgun Shells (Wide) and then pull the Switch to open a door at the top of the 2 ramps. This will also release another 3 Wild Dogs.

Make your way back past the sliding walls and run up one of the ramps to the door you just opened. Go through into the room with the four shafts of light. After the panoramic cut-scene place the Shaft Keys in the receptacles.

The Western Shaft Key goes in the receptacle on the left. Then as you make your way to the right the Northern, Southern and Eastern Shaft Keys. Once these are placed, beams of light will hit the center block and break it. 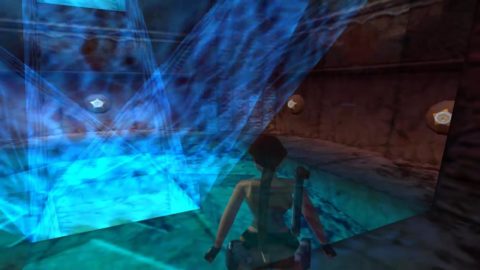 Pull the Switch on the wall to open the gate leading back to the main corridor. 2 Guards will run through to attack you. Run to meet them and once you’ve killed them one will drop Shotgun Shells.

Make your way back down the ramp but we’re not done with this area yet. Go through the tunnel, past the sliding walls to the metal basin room. The alcove on the right is now open. Pull the Switch to open a gate at the bottom of the blue beam of light and pick up the Large Medipak.

Make your way back past the sliding walls and through the open gate back to the main tunnel. When you reach the main tunnel you’ll be attacked by 2 Guards. One on your right and the other on your left. The one on the left will drop a Small Medipak.

Continue down the main tunnel, kill a couple of Bats and pick up some Uzi Clips on the edge of the pit. Take a standing jump to the other side, kill another Bat or two and then take a running jump over the next pit.

Shoot the Guard who appears from the gate on the other side but don’t jump over there just yet. Instead, turn around and walk back to the pit you just jumped over. Light a Flare and throw it down. It will reveal a Crossbow on a ledge down below. 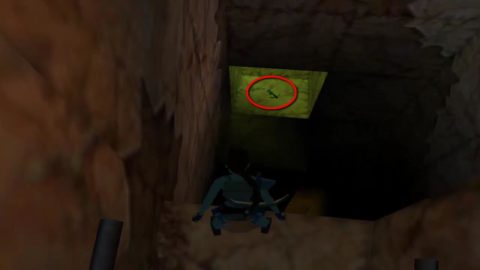 Jump down and pick up the Crossbow for Secret #1. This is the last secret of the game and if you’ve followed this walkthrough all the way through you should now have 70/70 secrets!

Take a running jump through to the room with the gate and shoot the Bats. Carefully climb down the hole with the blue beam of light and go through the passage near to the bottom to complete the level.