You begin this level still on the bike you found from the City of the Dead. Ride down the hill and run over a Gunman just to the right. Get off the bike and snipe the second Gunman on a high ledge at the end of the street.

Enter the building and hunt around the alcoves for some goodies. In the first alcove to the left you’ll find a Grenade Launcher and in the far alcove to the right a Small Medipak.

Make your way back to the entrance and climb up one of the blocks on either side. 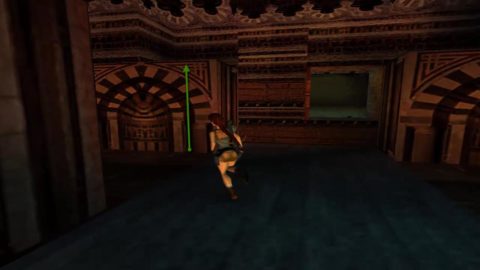 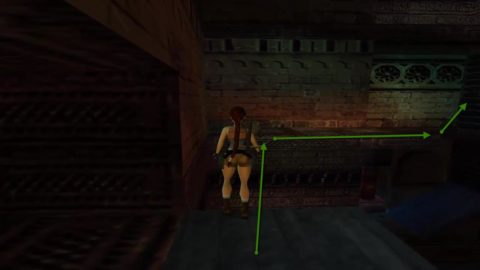 Traverse to the right, all the way around to the other side. Drop down, turn around and run through the passage on the left. Climb up the block at the end and continue through the passage to the rooftop where you’ll see a Lever but you don’t need to pull it. It opens and closes the front and rear doors of this building.

Turn around to look out over the open space. Jump across to the ledge on the left and then out to the overhanging ledge. From there take a running jump to grab onto the dangling Rope. 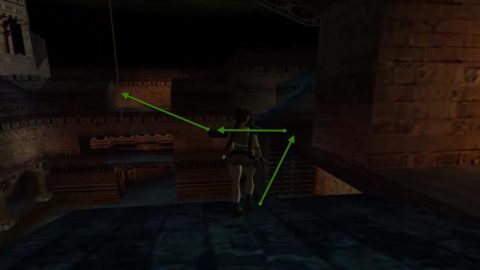 Turn slightly to the right, take a big swing and jump across to the ledge on the other side which is Secret #1. You’ll be attacked by 2 Beetles. Pick up the Large Medipak and Shotgun Shells (Wide).

This time take a running jump to grab the Rope and turn to the right. Take a big swing and jump across to the highest ledge. You’ll be attacked by a Gunman. Kill him and take his Revolver Ammo. There’s also a Large Medipak in the other corner.

Drop down the hole and slide down back to the bike. Continue driving down the street around to the left. Make sure you have enough speed to make it over the next gap.

Ignore the ramp on the right. You’ll return here later. Instead stay on the ground level and continue driving around the building. You’ll be attacked by another Beetle.

Get off the bike and hop up the small step. Turn to the right and jump up to grab onto the awning. Pull up run up the passage to a crawlspace. 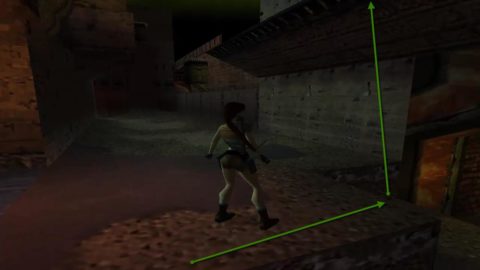 Crawl through and drop down into Secret #2. Here you’ll find Flares, Poisoned Arrows, Revolver Ammo and a Large Medipak. Climb out and drop back to the street level.

There is a second entrance to the building but ignore it for now. Continue running down the street and around the next corner you’ll see a Wheel guarded by a Minotaur. 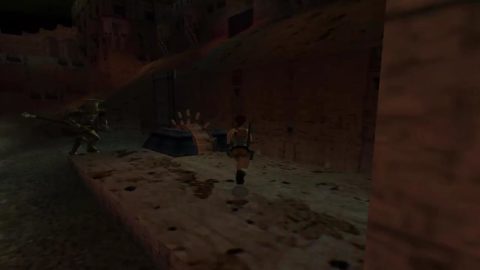 Pull the Wheel until the gate opens fully. The Minotaur will smash you with his hammer so keep healing up. Quickly run through the open gate and climb up the ladder. Climb up on one side so Lara doesn’t put her feet on the ladder. If she does when the Minotaur’s smashes his hammer she’ll fall off. Run through the passage up the top to end the level.