Enter the room ahead. You’ll notice a cage on the left with a large creature walking around. If you get any of the next three puzzles wrong the creature will be released and you’ll be forced to fight it. Luckily the puzzles aren’t too difficult.

Puzzle 1: Run to the right and Lara’s attention will be drawn to the symbol of two water lines on the wall. Ahead are the balancing scales where you’ll need to pour 2 liters of water into the pot on the left.

Pick up the Large Waterskin from the floor and stand in the water by the fountain. If you look at the Waterskins in your inventory you can see how much water they contain.

Walk over to the left side of the scales and use the Large Waterskin on the pot to pour out the 2 liters of water. This should balance the scales and the trapdoor in the center of the room will open. Drop down, run through the tunnel, kill the Bats and jump across to the pole. Slide down, while avoiding the spikes, to the room below. Shoot yet more Bats and head to the second puzzle room.

Drop down the trapdoor and follow the path down the Pole to the third puzzle room.

Walk over to the Scales and pour the water from the Small Waterskin into the pot to balance the Scales and open the last trapdoor. Drop down and run towards the shaft of light.

Jump into the shaft of light and grab onto the wall. Carefully drop or climb down past the first opening down to a second opening. Get off on the ledge to the right. You’ll be shown a cut-scene of Set down below. Turn around and dive into the water on the left side. 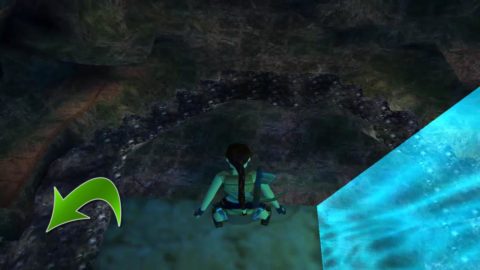 You can climb onto the central island from two places, one on the left side and one on the right. Find a way to climb up onto the island and place the 4 Holy Scriptures on the pedestals surrounding Set. Approach Set from the front for a cut-scene.

After the cut-scene, Set will lift up into the air and begin firing blue beams at you. There’s no way to kill Set so you’ll need to find a way to trap him.

When facing Set, jump into the water on the right side and pick up the Amulet of Horus from the bottom of the water. Swim around to the other side of the island and climb out onto a flat block in the outer ring.

Jump over the sloped block and run up the ramp on the left. The gate to this room should be open. It’s on the south side and opens when you pick up the Amulet.

Drop into the water and swim around to the other side. Once more climb up onto the flat block, jump over the slope and run up the ramp. This time take a running jump from the end of the ramp to the mossy rock ledge below.

Run along the mossy ledge and take a running jump to grab the ledge on the left and pull up. 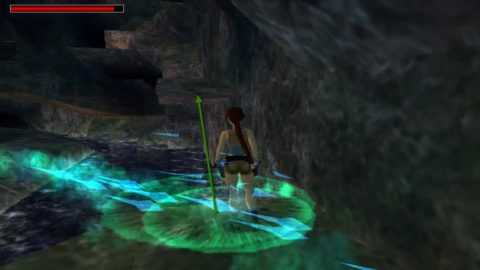 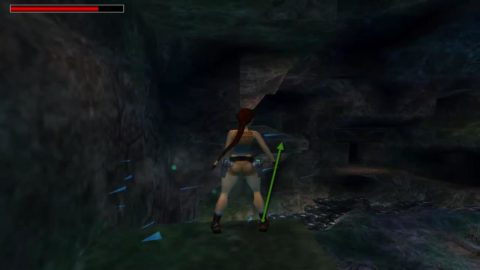 Pull up, walk to the edge and jump up to grab onto the roof. Monkey swing around to the left and then right, in between the wall and a rock jutting down from the roof. Drop down at the end. Follow the ledge along to the right and take a running jump at the end to grab onto a crawlway. Climb in and follow the tunnel around until you can climb out the other side.

Climb onto the wall again and climb up the blue shaft of light until you see a cut-scene. After sealing Set inside the cave you’ll need to make your escape.

Run through the gate and up the stairs, taking care to jump past the sliding walls along the way. If you look at the roof you’ll see skull symbols. When you walk under them the roof collapses in that area so steer clear of them or run past them quickly.

Slide down the next ramp and jump before you fall off the edge to grab the edge of the ledge in front of you. Pull up and run through the passage to complete the game.

Congratulations on completing Tomb Raider 4! There’s one more bonus level to complete, the Times Exclusive Tomb Raider Level, which you can download as a bonus goodie from GOG or find it online. It’s stand alone so you don’t need the full version of the game to play the bonus level.