Run down the tunnel and through the gate, which will close behind you. Up ahead are 2 Bull Guardians with Hieroglyphs Buttons behind them. To your left and right are two cells. one for each of the Bulls. You’ll need to run past a Bull to wake it up. Draw it back into one of the cells. Quickly run out and pull the Switch to lock the Bull in the prison. Do the same with the second Bull and lock it in the second cell.

To the left of the Hieroglyphs is a skeleton with Flares and just below the torch near to it you will find a Scrap of Paper. Look at the Scrap of Paper in your inventory for some clues although I don’t really know what it means.

Head over to the Hieroglyph Buttons. You’ll need to press them in order to open various doors. The first one you need to open is Right, Left and Middle. This opens the gate on the West side (left side when facing the Hieroglyphs) of the hall.

Stand underneath one of the chutes and use your Binoculars. Press the Action button to turn on the spotlights. You’ll be able to see Hieroglyphs at the end of the chute. These are the codes for opening all of the other gates. 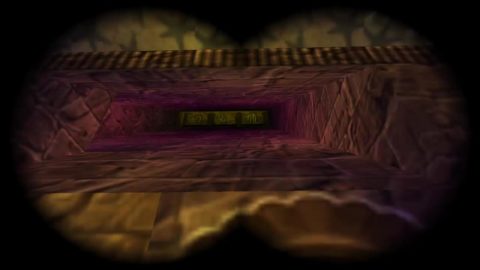 Once you’ve had a look at all of the chutes jump back over the pits and make your way back to the Hieroglyph Buttons. If you press the Hieroglyphs in the wrong order the Eastern Side North Gate will open. This is a trapped area with nothing in it except a Switch at the end that will open the gate to let you back out. The other areas you can explore in any order.

Press the Hieroglyph Buttons in this order to open the Western Side North Gate, Right, Middle, Left. Go through the north gate on the western side. The gate will close behind you.

Kill the 2 Bats and then jump up to the flat block on the right. Take a running jump across to the left and then back over to the far side. 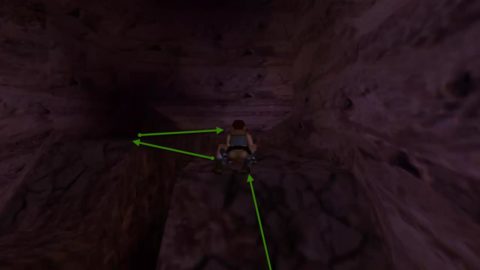 Jump out of the pit and kill another 2 Bats. From here there are 3 small crawlways, one to the left, one to the right and one straight ahead. Inside the tunnels are trapdoors that open when you crawl across them to a pit of spikes.

First crawl into the left tunnel. Take the first left and left again to find the Stone of Maat. Crawl back out the way you came and then go through the central tunnel.

Turn to the right and drop down on the breakaway tile. Walk forwards and pick up the Grenade Launcher for Secret #1.

Make your way back out to the cave and go through the last tunnel to the right. Avoid the concealed spiked pit ahead and turn to the left then take the next right. Follow the tunnel around to the end and pull the Switch to open the gate. Crawl out the way you came and make your way back to the Hieroglyph Buttons.

Press the Hieroglyph Buttons in this order, Middle, Left, Right. This opens the south gate on the western side. As you enter through this gate it closes behind you. Take out the 2 Bats and then jump over the pit ahead on the left side.

As you approach the island you’ll be attacked by 4 Crocodiles. Look in the 4 square recesses to open up a trapdoor in the middle of the island. Drop down the opening to find the Stone of Khepri. The Switch on the other side of the island from the entrance opens the gate so you can get back out.

As you make your way back you’ll be attacked by another 2 Bats. Getting back over the pit is a little tricky. You’ll need to take a running jump from the far right side, right next to the wall. Grab onto the edge on the other side of the pit and pull up. Make your way back to the Hieroglyph Buttons.

Press the Hieroglyph Buttons in this order, Left, Middle, Right to open the Eastern Gate. Kill a few more Bats and then jump over the pit on the left side. This takes you to a room with 9 square holes. If you look into some of them you’ll release a Swarm of Beetles.

Kill the 2 Bats and then get read for the water maze. There are 5 Switches that you will need to pull in the right order. You may want to save your game in between each switch just in case you get lost in the maze.

Switch 3 to Switch 4: This is the longest of all of the paths. Drop into the water and swim to the bottom. Take the tunnel to the left and take a left again at the t-junction. Follow the tunnel around the corner to the left and then take the next tunnel upwards. Swim back to the 4-way intersection where you started. You can pull up here for air or continue straight forwards for the next Switch. Follow the tunnel up and to the right for the next room. Pull the Switch to open the next trapdoor.

Switch 4 to Switch 5: Drop into the water and swim down. You’ll notice a Small Medipak on the ledge ahead. You can pick it up if you think you have the time. Swim down back to the 4-way intersection and take the tunnel to the left. Continue swimming up and forwards along this tunnel to the last room. Pull the Switch to open the gate and then pick up the Stone of Atum on the other side of the room.

Drop into the water and swim straight down, past the first intersection to the 4-way intersection. Swim up back to the starting room. Make your way back across the pit to the Hieroglyph Buttons. All the gates should be open now so head through the Western Gate.

Enter through the gate and monkey swing across the passage to the other side. Drop down, kill the 2 Bats and enter the next room. As you enter, the gate behind you will close and the spiked roof will start closing in on you. Quickly pick up the 4 Holy Scriptures from the alcoves to open the exit gate.

Monkey swing across the next passage, kill the Bats and run through the cave to the level exit.