You’ll land in a room with a lever, statues and a gate. Pull the Lever to open the gate and go through. You’ll slide down into a chamber with two magnifying glasses. When the glasses meet each other the chamber will fill with spikes so quickly pick up the Hand of Orion from the floor and jump to the left side of the magnifying glasses for Secret #2. Pick up the Shotgun Shells and go through the gate after it opens.

Make your way down the hallway to a spike trap. As the spikes start to pull back take a standing jump to the other side. 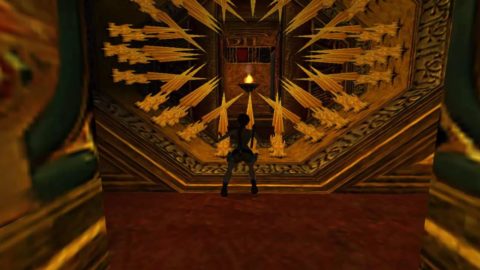 Run around the corner to the right and shoot the large jar for a Small Medipak. Head forwards and jump through another spiked trap. There’s a receptacle on the left but leave it for now. Drop down to the room below and pick up the Small Medipak on the left. Climb back up to the receptacle and use the Hand of Orion.

This will lower the spikes and start the blades spinning. Take a step back from the edge and take a standing jump to the edge of the central platform. Traverse across to the right, around the corner. Keep going until you’ve traversed around 3 corners in total. You’ll pass some Shotgun Shells on the platform along the way that you can pull up and grab if you’re brave enough.

Once you’re around the other side of the platform pull up just as a blade passes and backflip into the passage behind you. Run up the passage for a short cut-scene as you reach the Sarcophagus room.

Don’t approach the Sarcophagus yet as this will trigger another event. Instead light a flare and run around the outskirts for a Small Medipak and Shotgun Shells. Go through the passage on the other side into a room with Mummy cases and a statue in the middle.

Pick up the Small Medipak at the back of the room and drop down the hole in the far right corner. Walk into the small undercover area for Secret #3 with Shotgun Shells and a Small Medipak.

The Mummy cases will be open and the Mummies will attack if you get close to them so stay in the center. Push the statue in the middle of the room to the left once, towards the back of the room once and the left again onto the colored floor tile. This will open a passage behind the Mummy on the right.

The Mummies can’t be killed so don’t waste your ammo. Instead draw the Mummy out and then run around it through the Mummy Case to the passage beyond. Run down the passage and drop down. Continue forwards into a cave.

The cave will open out and you’ll see a temple towards the back and a wooden bridge to the right. 2 Black Dogs will attack as you walk out into the open.

Light a flare and run to the left side of the temple. Turn around to the left and continue climbing up the rocks.

You’ll notice a pit on the right side. Drop down for Secret #4 with a Large Medipak. Climb out and continue forwards. On the left is the bridge but you want to head straight ahead to the wide ladder on the far wall. 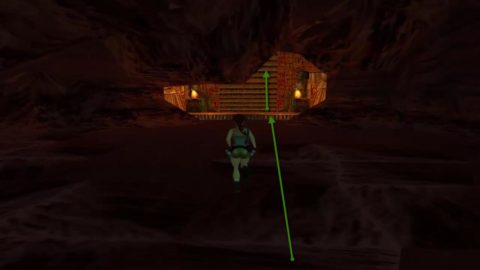 Climb up the ladder, turn around and shoot the large jar on the left for Shotgun Shells. Take one of the exits out of this room. You’ll notice 2 Mummies lying on the floor and an artifact on a pedestal. It must be a trap!

Above one of the Mummies is a gate that will open when you pick up the Golden Serpent. Quickly grab it and take a running jump into the passage before the Mummies stand up.

Slide down into the sandy room below and sprint to the left corner, on the same side that you entered. The spiked roof will lower but you’ll be safe in this corner.

Pull up into another cave. Follow it around to a Large Medipak just beyond a hole. Pick it up and then safety drop to the cave below. Walk up the steps and run across the wooden bridge. Continue up the bridge and take out the two Black Dogs that attack.

Walk to the back of the room and safety drop down the hole to the left. Follow the passage to the Octagonal Room. Look to the left and take a standing jump onto the block below. Take another standing jump into the small alcove which is Secret #5 where you can pick up some Shotgun Shells. 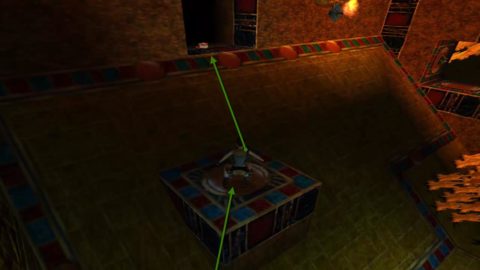 Slide down to the ground and run through the spikes to the other side of the room. Climb up the block on the left. Turn left and climb up the next block to the receptacle. You don’t have the Hand of Sirius so you can’t use it yet. Instead climb up the short ladder just in front of the receptacle and pull up. Take a standing jump onto the block in front and above and pull the Lever to open a gate down below.

Carefully climb down to the floor and go through the gate you just opened. Climb up the ladder into another small room and pull the Lever. This will cause the entire Octagonal Room to rotate.

Turn around. The ladder will no be on the wall to the right. Jump into the passage and run out. Slide down to the floor of the Octagonal Room and safety drop down the hole. At the bottom you’ll find the Hand of Orion. Pick it up and then run through the passage. 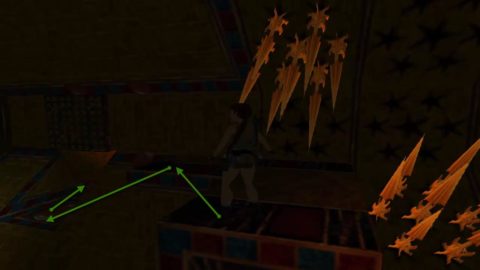 Go inside the passage and take a standing jump to the other side of the hole. Grab onto the ladder and make your way down. Pull the Rope to make the Octagonal Room rotate once more. This time the Scarab Talisman will be clear from spikes.

Before the Mummy wakes up climb up the ladder on the other side of the room. Turn left and take a standing jump onto the flat block. Climb up onto the ledge with the receptacle and use the Hand of Sirius on it which will lower a rope from the ceiling.

Turn around to face towards the center of the room and look diagonally to the left. You should spot the rope. Take a running jump to grab the Rope, line yourself up with the alcove with the talisman and then jump over to it. 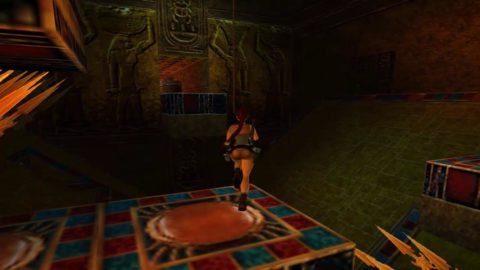 Pick up the Scarab Talisman and continue past the pedestal. Around the corner you’ll be attacked by 2 Black Dogs. A third Black Dog will attack as you continue around the next two corners.

Follow the passage back out the the large open area with the temple. The temple door will be open so go through. Make your way through to a room with sand. There are two receptacles on either side of the far wall. One for the Golden Serpent and the other for the Scarab Talisman.

Once you place the artifacts the room will start filling with sand and the Mummy will awaken. Run around it until the floor lifts high enough to climb up into a passage in one of the corners. Continue forwards to the level exit and a long cut-scene.

Next: Level 5 (Valley of the Kings)