City of the Dead

The moment you begin this level you’ll be attacked by 2 Gunmen, one on a block to the left and the other on top of the building next to it. The Gunman on the block drops the Revolver when he dies. You may want to combine the Laser Sight with the Revolver to turner it into something like a sniper rifles.

When both of the gunmen have been killed hop onto the bike with the side-car and drive down the street. There’s at least another 3 Gunmen that you can run over and a fourth behind a low wall. One of them will drop Shotgun Shells.

Line the bike up so you can take a jump from the pile of sand onto the ledge with the barriers around it. 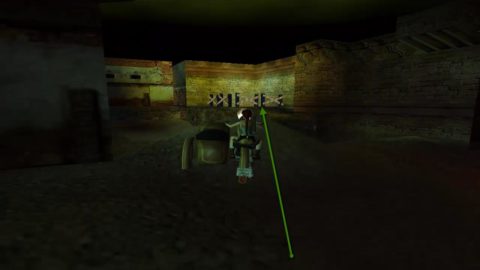 Crash through the barriers and the bike will drop through the floor to a tunnel underneath. Hop off the bike to pick up a Small Medipak and then hop back on the bike, drive around the corner and smash through the wall back to the street.

Get off the bike and climb back through the wall you just smashed through. Jump onto the brick ledge on the left and drop down the hole to the water below. Pull up into another tunnel and head to the right into a bat cave with short columns. At the other side of the cave you’ll find Shotgun Shells (Wide) and Flares.

Slide down the ramp on the right (as you entered) to a corridor with a dead body on your right. Next to the body is another Laser Sight. If you already have one then you won’t be able to equip it as you can only have one in your inventory.

Walk past the body and follow the passage around to the left. On the wall ahead is a crevice. Jump up to grab it, traverse across to the right until you can pull up. Turn around and use the Revolver with the Laser Sight to shoot the Blue Bell behind the canister. If you hit the canister you’ll release a swarm of Locusts. 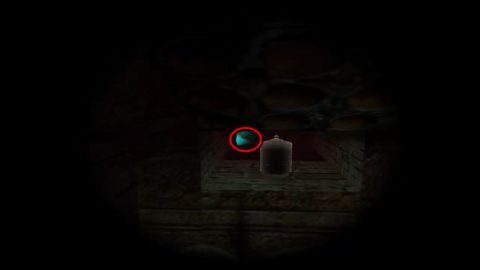 Swim out of the pool, drop down and run up the stairs on the left again. Now you can run across the ice to the other side and pull the Lever which opens a doorway in the passage you where in earlier.

Run back down the stairs to the passage and run to the right. Continue around the passage until you find the door you opened on the right.

You’ll enter another room with columns and torches. In a far right alcove you’ll find a Small Medipak. Go back to the first alcove on the right from the entrance and use the Crowbar to open the door for Secret #1. Inside you can find a Large Medipak and Uzi Clips.

Turn around and jump up to the block on the right. Climb up again and continue around the passage. Climb up once more to a crawlay above the start of the level. Drop backwards and hang onto the edge of the crawlway.

Traverse across to the right until you can pull up. Turn around and take a running jump to grab onto the Lever on the building opposite. This will open the large gates to your left and a Gunman will attack. You’ll explore the area beyond the gates in a little while.

For now run back to wherever you left your bike and continue down the street. At the t-junction you’ll be shot at by 2 Machine Guns. Take cover by the wall directly underneath them.

Hug the wall and drive a little to the left. Get off the bike and enter the alcove in the side of the building for a Small Medipak and a Grenade Launcher.

You can continue down the street and take out the remaining 2 Gunmen now. There is a deep pit up ahead so make sure you don’t fall down it.

Head back to the t-junction with the 2 Machine Guns and make a dash across to the building across the street. 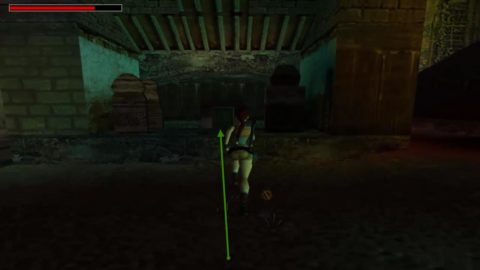 Press the action key to kick open the door and run inside. There’s a body on a grate. Pull the body across to the left as you’ll need to open the grate later. Leave the room, get back on your bike and ride it through the arch, down the street the way you came.

Take the next left and hop off the bike. Climb up the block in the corner and crawl through the passage. 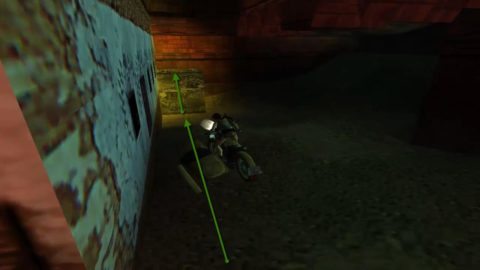 Drop down the other side, pick up the Small Medipak and pull the Lever in the small room. This opens the grate above where the body was located.

Climb up in the corner and jump up to the crawlway. Crawl in and run up the passage. Pull a second Lever to open a door elsewhere in the street.

Run back to the crawlway and drop back down. Head back to the street and hop back on your bike. Drive back towards the beginning of the level and go through the large gates. Drive around the left into a building with a central stairway.

There’s a Gunman on the ground floor that you can either run over or hop off your bike and shoot. There’s a crawlspace in the wall with Poisoned Arrows but I never use them.

Drive the bike all the way up the stairs to the top. Use the small ramp at the top to jump over to the gap on the other side. 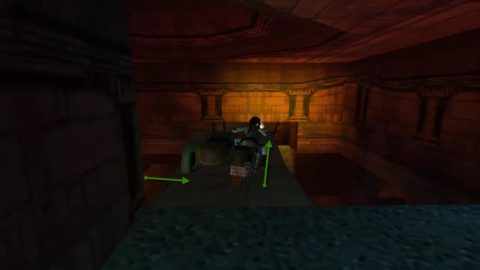 Hop off the bike and enter the alcove just past the next ramp going up. Kill the 2 Bats inside the alcove and then pull the Lever to raise up a block in the lower level of the building. Get back on your bike and ride up the ramp. You’ll drop down to the central area of the building.

Get off the bike and climb up the block you just raised up. Climb up again and run through the corridor to an opening above the street. There’s a broken Machine Gun on the other side so don’t worry about it. Take a running jump to grab the building on the other side of the street and pull up.

Enter through the open door and use the Crossbow with Explosive Ammo and the Laser Sight to shoot the Helicopter. After a few shots the Chopper will explode, taking the 2 Machine Guns with it.

Run up to the little ledge overhanging the street and take a running jump to grab the ledge on the other side. On the other side you’ll find a Small Medipak and a Lever. Pull the Lever to open the second large gate in the street below.

Go back and jump across the ledge to the other side of the street. Run back the way you came to the broken machine gun. Take a running jump, with action, to land in the passage on the other side.

Run back to the bike and drive it up the staircases to the top once more. This time drive around to the right and drop down to the street level.

Drive down the street to the t-junction, take a right and go left through the gate to end the level.

Next: Level 22 (Chambers of Tulun)