Run straight ahead down the road towards the ‘Do Not Enter’ gates and kill the 2 Guards that attack from the left. One of them drops a Silver Key. Head towards where the Guards came from and use the Silver Key to open the door.

Go through to an area with low blocks and take out another 2 Guards on the right. Check out the two alcoves either side on the left for a Small Medipak and Shotgun Shells. If you open the door first a Guard will take the Small Medipak.

To open the door jump across to both of the Levers and pull them. After you’ve pulled both of them the door on the other side will open and a Guard will run in. Go through the door that you just opened and turn towards the excavation pit on the right.

Jump or slide down to the first low block in the center, then across to the flat ledge on the left and take a running jump to grab the sandy block at the far end. 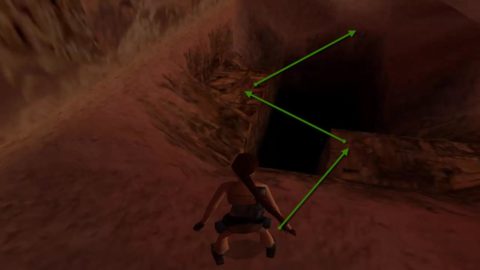 Kick open the door on the right and enter the building. Shoot the wooden crates next to the door for Uzi Clips. Pull the metal bookshelf on the right wall along towards the door once and then shoot out the metal grating in the crawlway. Crawl through, shoot the grating on the other side and then crawl out.

Push the Button next to the door and shoot the 2 Assassins. Go outside and turn towards the excavation pit on the left. Take a jump to the flat block on the right and then to the flat block at the end. Jump out and approach the next pit.

Run back out between the paws and continue around to the right. Jump across the pit on the far left side to make it across in a single standing jump.

Shoot the crates in the left corner next to the Do Not Enter Gates and take the Handle. Open your inventory and combine the Handle with the Metal Blade to make a Shovel.

Return back over the large excavation pit, retracing your jumps the way you came and run between the Sphinx’s paws. Use the Shovel on the cracked earth in front of the stone. Once the hole has been dug drop down and run through the tunnel to end the level.

Next: Level 28 (Underneath the Sphinx)