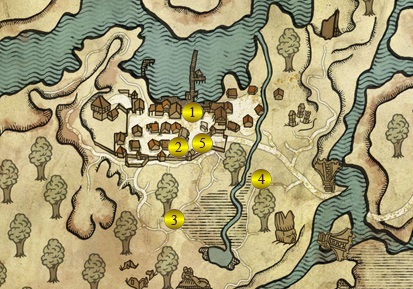 Check the Notice Board (#1) outside the local inn for details about the Endrega Contract. These little critters have infested the forest south of flotsam and it’s hoped that destroying their queens will thin out the infestation.

If you haven’t already found the book Three Years Among the Endregas visit Einer, the dwarvern Book Seller (#2) and read it to gain knowledge about Endregas. Unlike the first game you can also gain knowledge by just going out into the forest and killing Endregas.

Endregas are often found fighting with Nekkers in the forest. Watch out for the many traps scattered around the forest floor. You can pick them up for later use or to sell them.

The Endrega Cocoons are locate at points #3 and #4. Each location has 3 Cocoons. Once you destroy the last one an Endrega Queen will spawn. It’s a tough battle so early in the game.

There’s a few strategies that may help you defeat the Queen. All of her attacks cause a lot of damage and if you’re out of range she’ll spit poison at you. You can start by laying traps before you destroy the last cocoon. Traps that freeze or stun her will give you a chance to get around behind her. Casting the Yrden sign can also stop her for a few seconds.

The Queen will only travel a certain distance from the spawn point so if you need a breather move outside of her patrol zone. Bombs and Igni work well if you’re attacking from a distance. Cast the Quen sign before you get in close to finish her off.

If you’re really having trouble with this difficult fight collect traps from the forest floor and lay them down for the Queen to step on. Ten of the regular traps should take her down to about half health. you can also hide behind one of the many tree roots in the area. Sometimes you can get into a position where you can hit her, or use Igni, but she can’t hit you.

Once you’ve killed one of the Queens loot the remains for some rare loot, including the Queen Endrega’s Pheromones, which is needed in Chapter 3 for crafting the best Steel Sword in the game. The cocoons can also be looted for Embryos.

When you’ve killed both Queens head back to Flotsam and visit Louise Merse (#5) for 150 Orens and 75 experience points. If you’ve also completed the Nekker Contract you’ll be given the Diagram: Witcher’s Superb Silver Sword as an additional reward.