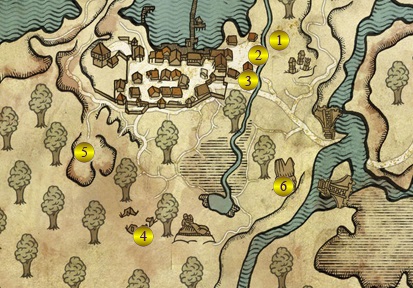 To start this quest you’ll need to have acquired the Amulet from Newboy in the Prologue. The quest can only be completed late in Chapter 1, after defeating the Arachas when you go with Zoltan to meet Iorveth.

If you have the amulet then head over to Anezka (#1). She’ll want to buy the amulet from you for 50 Orens, 200 if you haggle with her. If you ask her why she’s intrigued and pass a persuasion check she’ll tell you that the amulet is Melitele’s Heart and that it can be cleansed with the right ingredients.

The ingredients are fairly difficult to find which is why this quest can only be completed later in the chapter. You’ll need a Troll’s Tongue, Essence of Death, an Endrega Fetus and Arachas’ Eye.

The Troll’s Tongue can be found by winning the Troll’s Head mounted on the wall at Sendler’s (#2), buying it from Cedric or killing the Troll in the Troll Trouble quest.

Essence of Death can be found by looting the Wraiths in the Haunted Asylum. Details can be found in the In the Claws of Madness quest.

The Endrega Embryo is a common item found by looting any of the Endrega’s that can be found wandering around in the forest south of Flotsam.

For the Arachas Eye you’ll need to progross through The Assassins of Kings main quest until you reach the point where you go with Zoltan to meet Iorveth. As a test you’ll face the Arachas. After you’ve killed it make sure you tell Iorveth that you’ll meet him later so you can finish this quest.

Loot the Arachas and take all the ingredients back to Anezka (#1). She’ll tell you to meet her at Veyopatis’ Shrine (#6) after midnight. Once there you’ll be attacked by groups of Wraiths. They will come in threes and when you kill one another one will spawn. You’ll need to kill about 10 of them before the fight will be over.

Speak with Anezka and she’ll give you the cleansed Melitele’s Heart. It will grant you +1 Vitality regeneration. You also get 125 experience points for completing this quest.