In the Claws of Madness 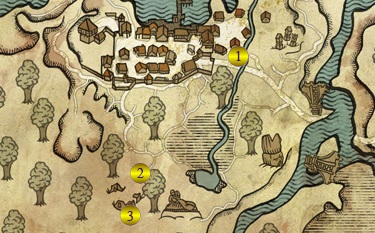 One of the notices on the notice board out the front of the tavern is regarding a couple of missing men. It was posted by Cedric (#1). To initiate this quest talk to Cedric and ask him about Witcher’s work. He’ll explain that two men went to investigate the ruined hospital and have gone missing.

On the way to the hospital you’ll meet one of the missing men, Rupert (#2). As you approach him you’ll be attacked by Nekkers. Afterwards he’ll tell you that his friend is still missing somewhere in the hospital.

Head down the steps leading to the entrance to the Ruined Hospital (#3). Most of the passages are blocked with fire so follow the only path that is clear. 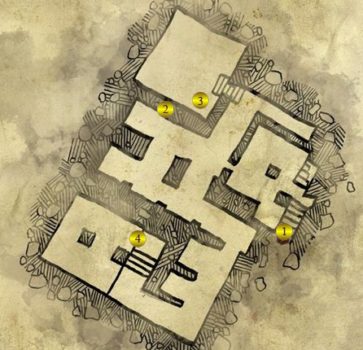 You’ll enter the Ruined Hospital at #1. Make your way around the passages, avoiding the flames as you go. At #2 is a point where you can climb up. Search the Chest (#3) to find the Hospital Files III. When you take the files 2 Wraiths will spawn. Use Yrden to trap one while you deal with the other. They hit hard but never block so keep swinging with your Silver Sword until it’s killed then deal with the second one.

Make your way to the drop down point (#4) which leads to level 2 of the ruined hospital. 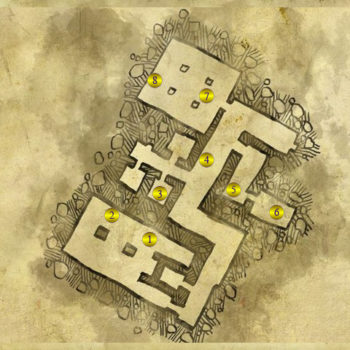 You’ll drop down to the lower level from #1 into a room with a Chest (#2) containing the Hospital Files I. When you take the files you’ll be attacked by another 2 Wraiths. Deal with them and then continue through the passages towards Grindley.

You can stop by the Circle of Endurance (#3) for an armour buff before speaking with Grindley (#4). He’s in quite a state and will need medicine before you can talk to him properly.

When you enter the room with the Medication (#5) you’ll be attacked by 2 Wraiths but this time there’s not much room to move around. Pick up Grindley’s Medication and then enter the next room and search the Chest (#6) for Hospital Files II.

Go back to Gridley and once you’ve given him the medication he’ll start telling you what really happened. His commander was conducting experiments on a Nilfgaardian Soldier, giving him herbs as a truth serum to find out where a certain treasure was hidden. Once the Commander had all the information he wanted he killed the Soldier. Now the Nilfgaardian Ghost is out for revenge.

Once you speak with Gridley the fire blocking the archway to the Niflgaardian Ghost (#7) will go out. Speak with the Ghost to find out that he won’t stop haunting the asylum until he has his revenge. He asks Geralt to bring the two men here so that he can take their eyes and hearts. There’s a Chest (#8) with Hospital Files IV at the back of the room.

Make your way back to the drop down point and you’ll find Gridley along the way. The two of you will automatically walk out of the ruined hospital.

Once you meet up with the two men you’ll have a choice, either bring them both back down to the Ghost or trick the Ghost by using Nekker or Pig eyes and hearts instead. You should have plenty of Nekker remains but if you don’t there’s a butcher in Flotsam who will sell you the pig parts.

If you take the two men to the Ghost the quest will be complete and the Ghost will stop haunting the asylum. You can take the ladder in the center of the room back up to Level 1.

If you trick the Ghost he’ll soon realize the deception and attack you. It’s not a difficult fight just stay away from the fire circling the edges of the entire room.

Once the Ghost has been defeated speak with the two men again. You can either take them to Loredo where his Mother will bring them in, or let them go. Either way you’ll gain 100 experience points for completing this quest.

Before you leave the area make sure you check out the other rooms that where previously blocked off by fire.