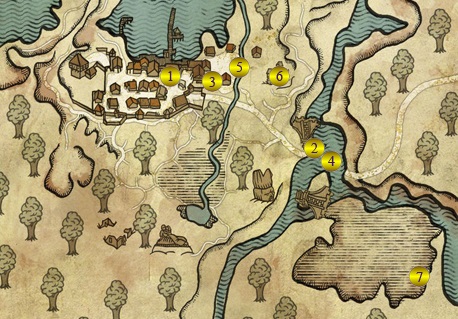 A fairly significant side quest in flotsam is Troll Trouble. There’s a Troll under one of the nearby bridges and Loredo as offered a reward for its death. The only problem is according to Geralt’s code of being a Witcher only evil creatures can be killed. Speaking with the locals you’ll find out that the troll is supposed to maintain the bridge and protect the area from evil creatures.

You can pick up this quest from the Notice Board (#1) outside the tavern. The logical thing to do is go and find the troll. Along the way you’ll meet a Man (#2) being attacked by three Nekkers. Once you save him he’ll tell you that troll is helpfull and pleads with you to keep it alive.

Head back to the small village and speak to the village elder, Chorab (#3). He tells you that the troll is good and wants to keep it alive also. He’s willing to give you a reward if you can convince the troll to continue its work of repairing and looking after the bridge.

Visit the Troll (#4) under the bridge. There’s no correct answer that will prevent it from attacking but once you reduce it to around half of its health it will stop and talk to you. The Troll says that his wife was murdered and since then he’s let the bridge fall into disrepair and has started drinking.

You can either kill the troll right now or try to figure out who murdered its wife. Two people with information are Zoltan, in the Tavern (#1), and Sile, in a room above the tavern. Zoltan will tell you to check the houses because it was probably killed to be used as a trophy. Sile said that a whole troll’s head is not useful for alchemy.

If you’ve visited Sendler’s house (#5) you would have noticed the Troll’s head hanging on the wall. Ask Sendler where he found it and he’ll tell you that he bought it from Dmitri and that Dmitri’s friends can often be found at the inn. You can win the Troll’s head from Sendler by following the Poker Face: Flotsam quest and instead of taking Orens as a reward ask for the Troll’s Head. You’ll need this later for a good reward.

Head back to the Tavern (#1) and speak to a suspicious looking character on the lower level. You can either use Intimidate or fistfighting to make him tell you that Dmitri can be located in the cemetery.

Make your way to the Cemetery (#6) and defeat Dmitri and his thugs. You may want to prepare for this battle as it’s quite tough. Dmitri was in the process of burying the body of one of Thaler’s agents and also mentioned something about Malena.

Search the bodies for loot and the Bandit’s Key which opens the Bandit Hideout (#7). Go back to the Troll (#4) and tell him that the murderer’s have been killed. Give him the Troll’s Head and he’ll reward with the Diagram: Hunter’s Armor.

Report back to Chorab (#3) for your reward. He’ll try to swindle you and only pay you half but you can Intimidate him for the full amount of 200 Orens.