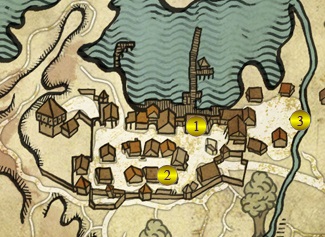 Poker dice is back in Witcher 2 although the dice look a little different and are harder to read until you get used to them. To initiate this quest visit the lower floor of the Tavern (#1) and approach the men playing dice. There are three opponents here and two that you can challenge right away, Casimir and Bendeck.

Defeat both of them and then speak with Zindrab who considers himself one of the local champions. Once you defeat him as well he’ll recommend you go and play Einar Gausel (#2), the bookseller.

Head over to the non-human district and play Einer Gausel, who should be in his house. You may want to browse some of the books he has for sale while you’re here. Once you beat him he’ll refuse to play you again and says that you should play against Sendler (#3) who’s apparently the best in the area.

Sendler will give you a different reward if you’re on the Troll Trouble quest so it’s best to start that quest before defeating Sendler. Visit Sendler in his house and play dice with him. He will give you Orens but you can ask for something else. The first time you defeat him you can choose from three different trap Diagrams (Conflagaration, Claw and Winter). If you ask him about the Troll’s Head and then beat him at dice again you can ask for the Troll’s Head as a reward. This can be used for the Troll Trouble quest.