The Bloody Baron is one of two main quests in Velen, the other is Hunting a Witch. They can be done in any order.

If you decide to speak to the Baron first make your way to Crow’s Perch. There is a moat all the way around the town so you can only enter across the bridge on the south side. 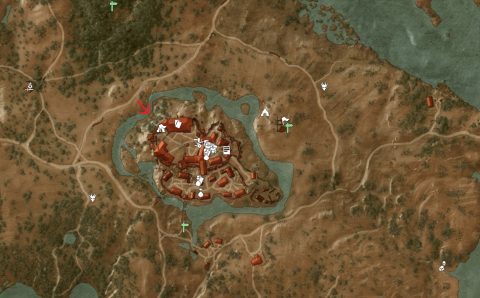 Depending on how you treated the Baron’s men at the Inn at the Crossroads you may have to find an alternate entry into the fort.

If you are sent away by the Baron’s men then look out for an old man sitting on some wood in the village in front of the fort. If you talk to him he’ll tell you about a story of a boy who fell down a well and appeared in the moat outside the castle.

Follow the old man’s directions to find the secret entrance to the underwater cave, shown with an arrow on the map above. It’s dark inside so you may want to prepare a Cat Potion. You’ll also need to deal with a Water Hag along the way. Find the well and climb up to the Baron’s fort.

However you end up inside the fort the Baron will give you a warm greeting. He does have news about Ciri but you’ll need to help him out in return.