Once you’ve finished in the palace at Vizima you’ll fast travel to the Hanged Man’s Tree in Velen. When you arrive the three main quests In Ciri’s Footsteps, Pyres of Novigrad and Destination: Skellige will all become active. You have plenty of time to complete them.

Follow the quest marker through the town of Mulbrydale and then west across the river to the Inn at the Crossroads. 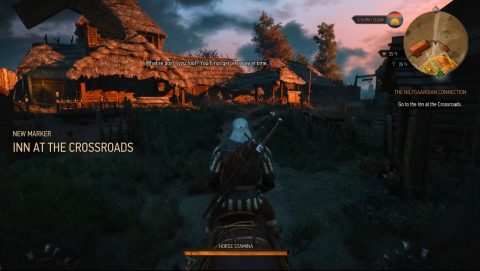 Enter the Inn and speak with the Innkeeper. He won’t divulge any information about Hendrik so you’ll sit down for a drink. At this point the Inn will clear out and the Baron’s men will appear.

You can either fight them by saying “Back off or die” or try to diffuse the situation by saying “I’m a witcher” or “Care for a drink?”

Your actions here will determine how easy it is to get into the Baron’s Fort at Crow’s Perch later. Regardless of how you deal with the situation the Innkeeper will give you more information about Hendrick. If you caused a scene he won’t be too happy and more of the Baron’s men will be waiting for you outside. You can avoid them by going out the back door.

Heatherton is a town directly to the west of the Inn at the Crossroads. When you get close you’ll notice everything looks frozen. It has recently been searched by the Wild Hunt. Search the village and you’ll find a man being attacked by Wild Dogs. 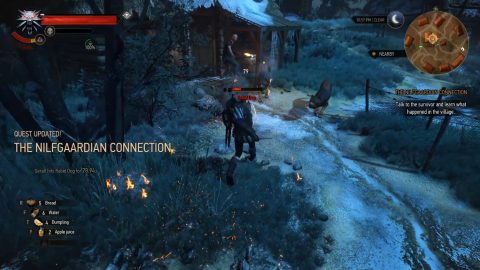 Fend them off and then speak to the man. Once you calm him down he’ll tell you that Hendrick was tortured and killed by the Wild Hunt.

Search Hendrik’s hut for information. In his boots you’ll find a Cellar Key. The entrance to the cellar is under the animal skin rug. Move it and climb down to the cellar. Activate the candle stick on the wall to reveal a secret trunk with Hendrik’s Notes.

Hendrik’s Notes will give you two leads, the Bloody Baron at Crow’s Perch or a Witch living near Midcopse.