A Poet Under Pressure

After performing in the play and making contact with Dudu you’ll have a plan to rescue Dandelion. Make your way east out of Novigrad and pass the Seven Cats Inn. Make your way up the hill to where Zoltan and the others are waiting.

If you helped Dijkstra find his treasure you can ask him for help and he’ll send 6 men with you to help with the ambush.

Priscilla will soon arrive with a note from Dudu saying that the conoy will leave at dawn. You can ask Priscilla to leave but she’ll stay no matter what you say. While waiting she’ll challenge you to a game of Gwent.

As morning approaches you’ll hear the sound of horses. Once the road has been blocked the fight will begin. A man will ride off with Dandelion and Zoltan will yell out to you to follow him. 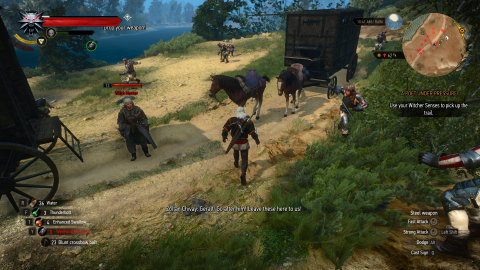 Jump on Roach and chase after the horse. Along the way you may notice a Pegasus Ring that Dandelion dropped. It can be found just before a small river. Later on you’ll find some Notes. Keep following the tracks until you get to a village.

You can ask the Smith about the rider or follow the tracks into the woods where they’ll stop at a house. The Dwarves out the front are upset about the intruder and give you the Key to the back door so you can deal with him.

Head through the back door and up the ladder. Take out the Witch Hunter and then talk to Dandelion to complete the quest. Make sure you talk to the Dwarves out the front before you leave. Completing this quest starts the Cabaret side quest.