Enter the city and head towards the Hierarch Square. One you get close enough a cutscene will begin with the commander of the Temple Guard and two victims burining on the pyres. 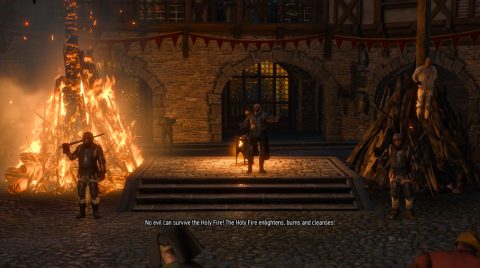 Head south and go follow the map marker through the wooden doors to a private courtyard. This was Triss’ home but it’s being looted by a couple of thieves. Talk to them to find out Triss may have gone to seek help from the King of Beggars. The captain of the Temple Guard and Witch Hunters, Caleb Menge will interrupt and arrest the two looters. He also warns Geralt not to make a wrong move.

Take a look around inside Triss’ house where you’ll find some interesting items, including the Rose of Remembrance. Once you go back into the square there will be another small cutscene.

The King of Beggars

You can find the King of Beggars in one of three ways, following a thief to the hideout, asking a beggar or finding the sewer entrance near the Glory Gate.

To look for a thief wait near one of the search areas shown on the map. When you see someone pickpocket one of the citizens follow him as closely as you can without being spotted. Along the way you’ll be bothered by a beggar. End the conversation as quickly as possible and continue following the thief. Once he reaches a bridge he’ll hand the pouch over to another thief. Follow the new thief to the entrance to Putrid Grove. 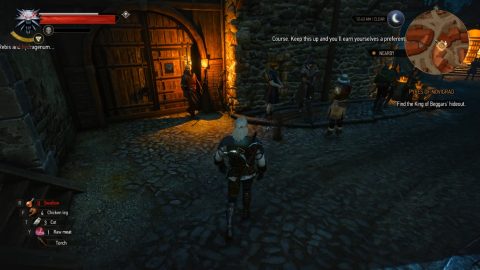 Trying to get the information from one of the beggars will be difficult as most of them won’t want to talk, even if you give them money. The beggar on the wooden scaffolding near to the bank of Vimme Vivaldi will talk but you’ll need to push the conversation. If the conversation ends ask him again and he’ll eventually tell you the location of the Putrid Grove and the password to get inside.

The sewer entrance by diving into the water near to the Glory Gate. The entrance will be under the bridge. Follow it to a group of Drowners around a body. Kill them and search the body for a Key. The key can be used to unlock a grate. Head through the grate and up a ladder into the Putrid Grove. The thieves won’t be too happy about your sudden appearance and will attack. Weaken the leader until he begs for mercy and you can continue on your way.

Francis Bedlam is the King of Beggars and can be found in one of the houses talking to Triss. He appears to have big plans for the city but Geralt isn’t convinced it will work out well. After the talk you’ll head off with Triss.

Geralt will tell Triss he’s searching for Ciri and she agrees to help but she has a few errands of her own that she needs help with.

The first errand is to retrieve a package for Triss that a smuggler dropped into the canal after getting scared off by the Temple Guards. You’ll need to avoid the Temple Guards along the way which means taking a path through the cellar. Use your Witcher senses to find a brick which acts as a lever to open a secret passage. Follow it along to the canal. You’ll need to dive into the water and fish out the package for Triss. 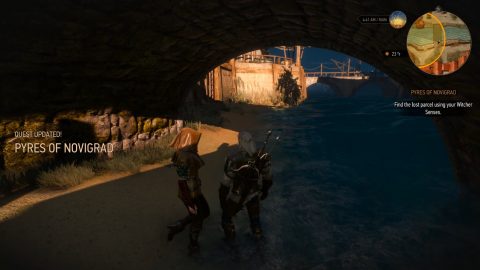 Follow Triss to the location of the second errand, a contract with a man named Brandon to clear a warehouse of rats. You can bargain with him over payment and he’ll willingly pay the full amount up front.

Inside the warehouse use your Witcher senses to find the three locations where Triss should place the incense. Once she casts the spell all you need to do is wait so you’ll have a bit of a chance to talk to Triss.

Once the rats flee Brandon will return but with a couple of Witch Hunters behind him. It was a trap to catch Triss. Kill the Witch Hunters and then head outside to confront Brandon.

After the confrontation Triss will say she needs to head off to take care of a few things but points you in the direction of an oneiromancer called Corinne Tilly who may be able to help locate Ciri.