Destination: Skellige is initiated once you complete Imperial Audience. You can go there before completing the main quests in Velen and Novigrad but it’s recommended for characters over Level 15.

When you track the quest 3 markers will appear on your map. None of the captains of these ships will take you directly to Skellige but Captain Liglad will tell you to talk to Captain Wolverstone who can be found at the Golden Sturgeon. He’s the captain of the Atropos.

Wolverstone can be found having a drink in front of the innkeeper. He’ll agree to take you to Skellige for the small fee of 1000 Crowns. Pay the coin and then tell him you’re ready to go. 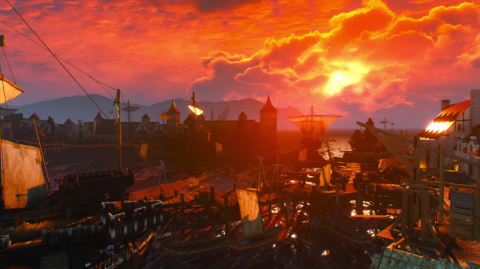 During the voyage your ship will get attacked by Pirates. Fight them off with the crew and once most of them are dead Geralt a cut-scene will play out where the ship crashes and Geralt will get hit on the head by a mast.

When you wake up you’ll be on the shore of Ard Skellig with a man, Steingrim, trying to rob you. Ask him about Yennefer and he’ll tell you how to get to Kaer Trolde.

To the south of where you landed you’ll see the wreck of the Atropos. Search around the area for Wolverstone’s body. Examine the body to get your 1000 Crowns back. Examine the other chest in the area for random loot and diagrams.

Make your way to the Kaer Trolde Harbor where you’ll meet Yennefer during a performance by the locals. You’ll have to attend a wake with her. Once you speak to Crach an Craite, who also demands you attend the wake, the quest will be complete.