The King is Dead – Long Live the King

Use the map marker to make your way to Yenneger’s room in the Kaer Trolde harbor. Pick up the clothes in the chest that Yennefer told you to wear. Once you put them on keep them on. If you take them off and put them on again the game will think you’re not wearing them. You can get around this by wearing the Formal Courtier’s Clothes from Imperial Audience.

Go back and see Yennefer. If you’re wearing the correct clothes she’ll give you a compliment. Walk with her to Kaer Trolde. You can decide to do some exploring along the way although Yennefer won’t be too happy and will wait for you ahead. 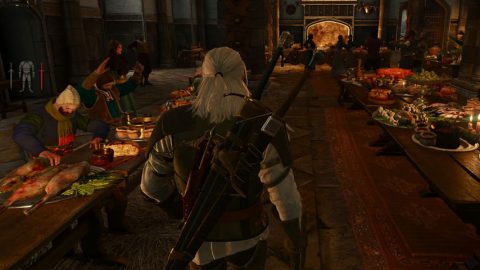 Once you get to the wake you’ll be sharing a table with the Jarl’s sons and his daughter, Cerys an Craite. She challenges you to a foot race. If you agree you’ll need to race her to the top of the mountain and be the first to pull out Hjalmar’s axe.

Back at the wake people will be making toasts and Yennefer will pull you aside to speak in private. You’ll bump into two of the Jarls. One of them, Madman Lugos, will insult Yennefer. You can challenge him to a fist fight or let it be.

Follow Yennefer and she’ll let you in on the plan. You’re going to break into Ermions’ Laboratory to steal the Mask of Uroboros. The door is guarded by Ravens so Yennefer will suggest going through a window.

Once through the window you’ll be in the trophy room. Use your Witcher senses to have a look around. Interact with the door and Geralt will cut himself causing him to hallucinate. All of a sudden the animals will come to life and attack. They’re easy to deal with because they’re only illusions. Yennefer will will bring Geralt back to himself and have a laugh at Geralt attacking stuffed animals. 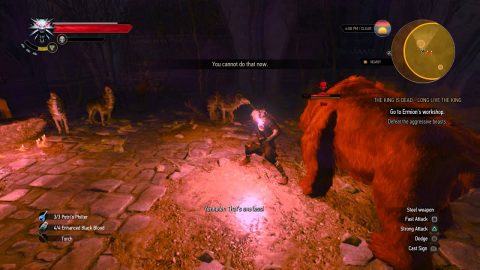 Go through the door to the laboratory and you’ll see a statue holding out its hand. Use your Witcher senses to find three objects that you can place in its hand, a Cup, Skull and Pinecone. The Cup is the correct object and once placed in the statues hand will open a secret door.

Follow the path to the end to find the Mask guarded by an Earth Elemental. Yennefer will damage it with lightning strikes and can even defeat it on her own. Help her out if you want to get through the fight quicker.

After the fight the room will fill with a poisonous gas. The only way out is through a portal. Yennefer asks you to think about something quickly. The first dialogue option will see you crash landing back at the wake and the second option will see you back in Yennefer’s room where you can spend some time with her before going back to the wake.

After the wake you’ll have a chat with Crach an Craite who agrees to speak to the druid Ermion on your behalf to let you see the site of the explosion. He also asks if you can help look after his children. This begins the Possession and The Lord of Undvik quests.