As you enter this level you’ll still be underwater with the Pharos temple in front of you. There’s a small gap in the roof where you can climb out for air but you shouldn’t neet to use it. You’ll also need to watch out for the large Hammerhead Shark swimming around but if you move quickly it shouldn’t bother you.

Walk up the steps through the opening and as you approach the top you’ll be attacked by a Skeleton. An explosive arrow or grenade should do the trick.

Drop into the pool at the top and swim through to an underwater room with three doors. The doors to the left and straight ahead have nothing behind them so open the door to the right by pressing the Action button and swim through.

Swim up the ramp and pull up into a large room with three staircases. A Golden Bird Statue will fly down the stairs to the left and shoot golden beams at you. You can kill it with a couple of explosive arrows.

As you enter the Pyramid Room you’ll be attacked by another Skeleton. Get rid of him and then take a look at the pyramid. You’ll need to find 4 Black Beetles to place into the receptacles on each side of the pyramid. Two of them can be found in this area.

The slide to the right as you enter has nothing in it except a broken black beetle. Don’t bother sliding down there. The other two slides to the left and straight behind the pyramid you’ll need to explore. 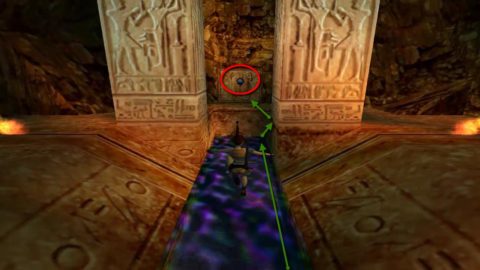 Run back along the ledge to the entrance and take a standing jump back to where the ramp was. The ramp has turned into a stairs. Place the First Black Beetle into one of the receptacles on the pyramid and slide down the ramp opposite the entrance.

Take a jump to make it as far across the oil as possible and then pull out at the end before it’s set on fire. Use the Crowbar to jimmy out the Second Black Beetle and then take a standing jump back to the ramp, which has also turned into steps.

Climb back up to the pyramid room and place the Second Black Beetle on the pyramid. Run back to the room with three stairways and this time head up the stairs that are now on your right (on the left as you first entered from the water). 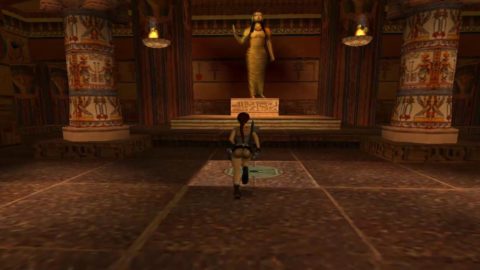 Climb up the pillar in the far right corner of the room and use the Crowbar to grab the Third Black Beetle. This will unfortunately also release hundreds of little beetles that will start biting you. Quickly drop down to the floor and climb up the pillar in the far left. Grab Broken Black Beetle which will release more little bugs. You need to grab both of these black beetles to raise the blocks next to the side walls so you can climb into the small alcoves.

Drop down to the floor and run to the trapdoor. Hang off the edge and let the beetles fall down the hole. They’ll land on a pillar underneath. If you want to drop down safely pull up and run around a little. The beetles will fall off the block under the trapdoor. You can now safety drop through the trapdoor to the block below.

Drop down to the floor and quickly run to the back of the first pillar on the right. Climb up to the sloped edge, closer to the right edge, jump backwards to the sloped pillar behind you and jump again to land on the back ledge.

Run back to the room with three stairways. Another Skeleton will rise up and attack you. Take the center stairway back to the Pyramid Room and use the Third Black Beetle on one of the receptacles on the side of the pyramid.

Run back to the three-stairway room and head up the last staircase which is now on the left (on the right from the entrance to this room. This will take you to Cleopatra’s Palaces.

Run down the passage and go up the stairs at the back of the large room. 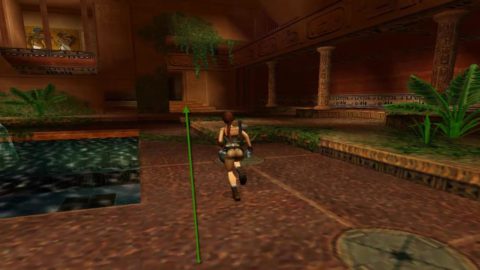 Use the Crowbar on the door on the other side of the room from where you came up from the ramp. Run through the passage and use the Crowbar on another door. Slide down the ramp into the room with a pool of oil. Quickly walk around to the left and climb up out of the oil to the ledge on the right. You should be able to pull up just before the oil catches fire. 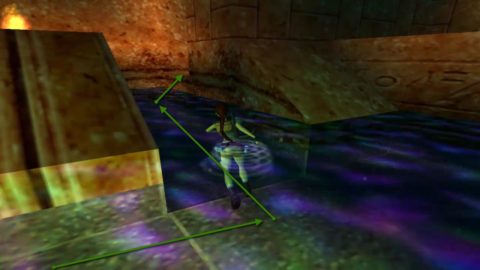 Use the Crowbar to take the Fourth Black Beetle. Turn around and jump diagonally to the left to the ledge on the other side of the oil. Save the game here and take a standing jump to the opening with the ramp, which has now turned into steps. With a regular standing jump you should be able to land in the opening on the right side. Climb up the steps and drop down to the main room with the fountain. Leave the way you came and go back to the three-stairs room.

A Golden Bird Statue will attack you. Kill it and then go up the center staircase back to the Pyramid Room.

Place the Fourth Black Beetle in the pyramid and it will open up completely. Take the golden Mechanical Scarab from the center. Head back to the three-stairs room and run up the stairs on the left (right from the entrance) back to Cleopatra’s Palaces.