After the cut-scene you’ll be in an open desert area scattered with small blocks. As you explore this area Von Croy’s Armed Guards will move out to attack you. There are 7 Armed Guards in total and the easiest way to take them down quickly is to run at them and shoot off a couple of shotgun shots.

Once the area is clear make sure you pick up all of the loot. The most important is the Ignition Key. You’ll also find 3 Small Medipaks, 3 Uzi Clips and one Large Medipak.

Before getting in the car we’re going to find a couple of secrets. The first is to the right of the entrance as you step out to this open area. Climb up the small block and then line up a standing jump to grab onto the next flat block leading up to the area behind the entrance. Pull up and jump up to grab the rock wall and pull up once more. 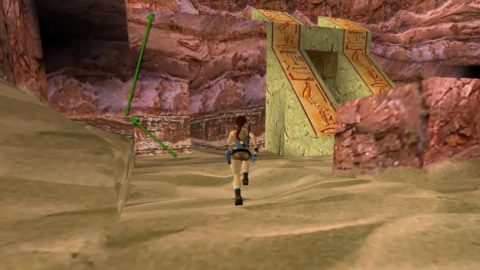 This is Secret #1 where you can find 2 Shotgun Shells, Small Medipak and Uzi Clips. Drop down to the ground and go to the other side of the entrance, the left side as you enter into this area. Jump up to the small cave. 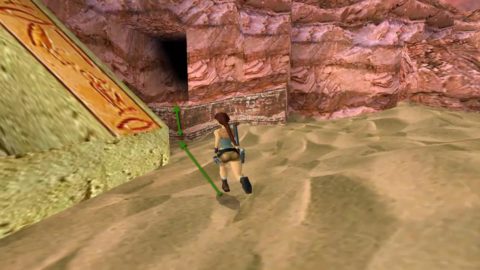 Light a flare and climb up into the dark area at the back which is Secret #2 where you’ll find the Shotgun, if you don’t have it already, and 2 Shotgun Shells.

Head back to the open area and go to the Jeep. Use the Ignition Key on the left side of the Jeep to get inside and follow Von Croy. He’ll throw Grenades at you as you drive so make sure to swerve out of the way.

Around one of the corners will be another Armed Guard. The easiest way to take him out is just to run over him. Soon you’ll come to a bridge arching over the canyon. You can drive up on the right side. Run over the Armed Guard at the top of the bridge and then park the Jeep. 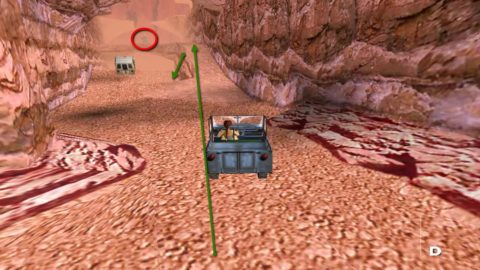 Secret #4 is in a cavern down a hole at the base of the ramp. Walk back down and use the ladder to climb down the hole. The entrance to the secret will be just to the right. Crawl inside and pick up the Small Medipak, Large Medipak and Super Grenades.

Climb back out and run up the ramp to your Jeep. Get inside and carefully follow Von Croy along the path, taking out another 2 Armed Guards along the way. Before too long you’ll reach the level exit.