This level features a series of small buildings connected via underground tunnels. You begin outside facing a boarded up building. Run towards the gas station to the left and kill the 2 Wild Dogs along the way. Behind the truck is a Jerry Can. Pick it up and then return to the boarded up building.

Shoot the boards with the’Danger’ sign, enter the building and kill the Bats inside. The central block is actually a trapdoor but it’s disguised. Stand just in front of it and press ‘Action’ to open it. Hop backwards down the hole and climb down the ladder to the bottom. Pick up the Large Medipak at the end of the passage for Secret #1. Climb back out and leave the building.

Turn right and right again to run between the buildings and use ‘Action’ to open the door to the first building on the left. Open the trapdoor and run through the tunnel. Kill the Wild Dog and take the first left. Continue through the tunnel, killing another Wild Dog along the way and enter the square room at the end.

There are 3 Lion’s Heads on the walls with Gems in their mouths. Pick up the Small Medipak and then jump up and shoot all of the Gems to open the door. When the door opens shoot the 2 Mummies with something explosive and go inside to pick up the Small Waterskin.

Run back the way you came and at the intersection take the tunnel to the left. Kill 2 Wild Dogs along the way and at the end climb out to the outside area.

Kill the Black Scorpion and then run to the left and turn right at the intersection. A Wild Dog attacks from the right. Stand in the middle before the pit and take a running jump to the other side. 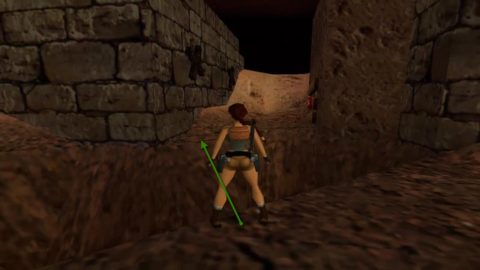 Shoot the boards at the entrance to the building on the right, open the door and go inside. Kill the Wild Dog and 2 Bats and then open the trapdoor. Follow the tunnel and take the first right. At the end you’ll be attacked by 2 Wild Dogs and a Bat.

Once again shoot the 3 Gems from the Lion’s mouths to open the other door. Go inside and pick up the Bag of Sand. Leave the way you came and take a right at the intersection. Ignore the next path to the left and keep running forwards. Climb out of the hole at the end of the tunnel and shoot the Bats. 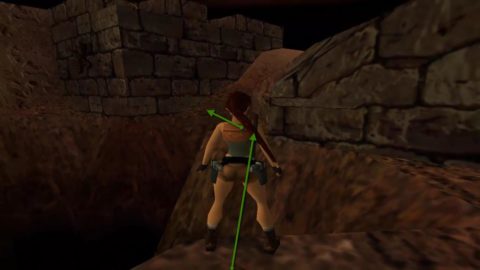 Enter the ruined building on the right, kill the 2 Black Scorpions and then open the trapdoor. Run through the tunnel, take a right at the intersection and kill the Wild Dog along the way. At the end of this tunnel pick up the Torch from the floor. Run back the way you came, continue straight ahead past the intersection to another room with Lion’s Heads.

Drop the Torch because here you’ll be faced with 3 Wild Dogs and 2 Bats. Once they’re dealt with shoot the Gems from the Lion’s mouths to open the other door. Enter through the door you just opened to the Scale Puzzle room and kill the 2 Bats.

Go through the eastern door and don’t worry about the Gems in the Lion’s mouths. Go up the steps, kill the Wild Dog and continue through the tunnel. At the intersection take a left and pick up the Large Medipak at the end. When you do a Wild Dog will appear behind you. 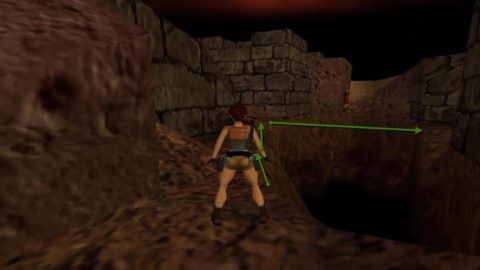 Pull up and enter the door on the right. Kill the Bats, open the trapdoor and drop down. Run through the tunnel, kill the Black Scorpion and then take the first left. Take out the Black Scorpion at the end and pick up the Revolver Ammo. Run back the way you came and take a left at the intersection.

Kill another Black Scorpion and then climb up out of the hole. Shoot the Wild Dog and then shoot the boards to the next building. Open the door, kill the Bats and then open the trapdoor before dropping down.

Run down the tunnel and take a right at the intersection. Pick up the Small Medipak and turn around to kill a Wild Dog that attacks. Head back to the intersection and this time run straight ahead.

Follow the tunnel to an anteroom and take out the 2 Wild Dogs and 2 Bats. Once again you’ll need to shoot he 3 Gems from the Lion’s mouths to open the door opposite the entrance.

Go through the door to see 3 Monkey Statues. Use the Crowbar on the Lever in front of the right statue to release a friendly monkey who will climb up to pull a Lever which opens the door to the right. The other two statues will release monkeys that will attack you so you can just ignore them.

Go through the door on the right and take out the 2 Mummies before use the Crowbar to pry the Southern Shaft Key from the wall. This also opens the door on the other side of the monkey statues.

Go through the door you just opened, run up the stairs and follow the tunnel around to the right. Climb up the two blocks on the left and continue forwards to end the level.

Next: Level 32 (The Great Pyramid)